Munich Insider » Munich and Surroundings » Kunstareal and the Pinakotheks 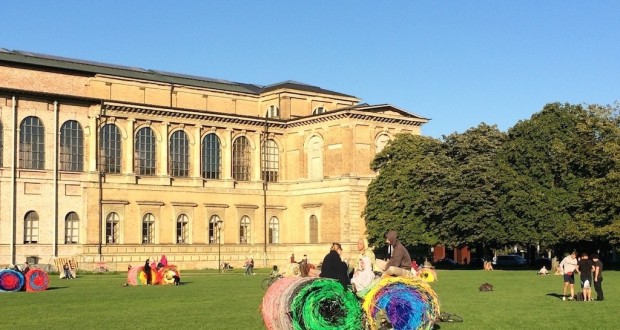 Almost all Munich’s art museums are located within a few adjacent city blocks. This arts quarter is called Kunstareal (Arts Area). It is located in the downtown, and if you look at the map, it is inside the quadrilateral whose vertices are four U-Bahn stations: Odeonsplatz, Königsplatz, Theresienstrasse and Ludwig-Maximilians-Universität. It is very convenient for art lovers as well as for just curious tourists: in a short time you can see and compare a lot of exhibits without travelling great distances in the big city. All three Pinakotheks, the Lenbachhaus Gallery, Glyptotek and other museums of antiquity and modern arts, total of about a dozen museums, are situated in the Kunstareal. Personally, I do not know anyone who has visited all these museums, but it is clear that one would need not just a couple of days to do that. In this article, we describe just a short stroll through the museum quarter and a visit to the Alte Pinakothek. 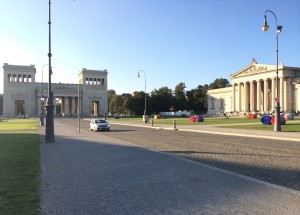 One gray fall weekend we came to the Königsplatz square. It is the best starting point for the promenade through museum attractions. Königsplatz has a very formal appearance and it even looked somewhat gloomy under the overcast sky. It is a large empty rectangular area which is surrounded by buildings stylized as ancient temples with colonnades and porticoes. In fact, they were built in the early 19th century, and only two of them are museums: the Staatliche Antikensammlungen (State Collection of Antiquities) and the Glyptothek. The Collection of Antiquities contains rare objects of ancient Greek and Roman art: vases, goblets, gold jewelry, bronze, ceramics and so on. The Glyptothek also displays the art of ancient Greece and Rome. Likely because of that, the buildings of both museums were designed in the same architectural style of ancient temples with columns. The Glyptothek exhibits a collection of ancient sculptures: statues, busts, steles and so on. Someone may think that this art is not for everyone, but they have enough visitors and the museum halls are not empty.

From Königsplatz we headed towards the Pinakotheks, located a 5-minute walk from the square. Our plan was to visit only the Alte Pinakothek that day, but it was interesting to have a look at the others at least from outside, especially since they are all situated next to each other. 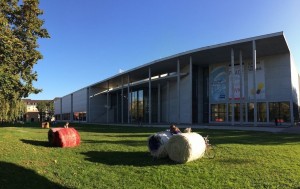 The Neue Pinakothek’s architecture did not impress us, it is quite a dull glass-and-concrete building. They say that the old building of the Neue Pinakothek was much more attractive, but unfortunately it was destroyed during the World War Two. The Neue Pinakothek exhibits masterpieces of painting and sculpture of the 19th and early 20th centuries. I would be very interested to browse through the Impressionist collection, which is very expansive. Well, I am going to drop by at another occasion. We walked to the Pinakothek der Moderne. We liked its building architecture much more: modern design, light and bright, very appealing. This Pinakothek displays the best examples of contemporary art: from paintings to new media, architecture and furniture. It is always full of visitors; probably this art is for everyone’s taste. I thought that we should come here at the first possibility. However that day, our path led to the classics – we headed to the Alte Pinakothek. 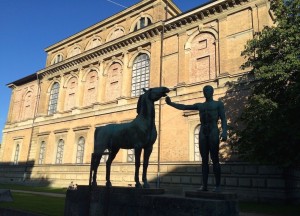 First, a few words why the most famous art gallery in Munich is called Pinakothek. The ancient Greeks called pinacoteca the premises for exhibiting paintings. This is exactly the case in the Alte Pinakothek in Munich which exhibits paintings and no other art objects, such as sculptures etc. This allows the visitor to focus on the paintings without any distractions. I found this to be a good idea. Visiting some, even famous museums, may sometimes leave a complete mishmash in one’s head of what have been seen there. So, eventually the only impression after such a museum visit could be that it was checked of the list and that’s it. 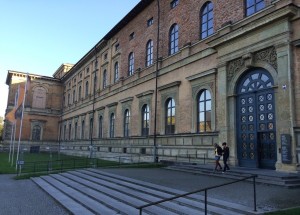 The wide facade of the museum building seemed a little lackluster, though this impression was somewhat brightened by the lovely arched windows. There are many buildings in Munich built in a similar architectural style. Probably, king Ludwig I of Bavaria, who reigned in the early 19th century and ordered the construction of the Alte Pinakothek as well as other similar structures, liked this style. By the way, Ludwig I invested quite a lot in arts, and the collection of paintings in the Alte Pinakothek was established largely thanks to him. Paintings by the artists from the Middle Ages to the 18th century are on display here; therefore, this Pinakothek is called Alte (Old). Admission was €4 a person. It was Saturday, and if we had come on Sunday, we would have paid only €1. Apparently, the price reduction is due to the renovation inside the building, which will last until 2017. As a result, some of the halls were closed. Nevertheless, a huge collection was still open to visitors, and we were able to see most of the well-known and important paintings.

The gallery exhibits paintings mostly by German, Flemish and Italian artists, though there are also many works of French and Spanish artists. I wanted first of all to see the works of two German artists – Albrecht Altdorfer and Albrecht Durer. These two outstanding masters lived around the same time and both were Bavarians, the former was from Regensburg, and the latter – from Nuremberg. I stood for a long time examining all the details of Altdorfer’s painting “Battle of Issus”. It depicts the battle of Alexander the Great with Persian king Darius. This relatively small canvas shows not only the battle itself in great detail (every soldier, armor, weapon and so on are meticulously painted.), but also a mountainous landscape with the setting sun and rising moon. The picture is also interesting for its conception, showing the confrontation between West and East. Well, this conflict is still ongoing…

In the hall with Durer’s paintings, I spent some time in front of his famous self-portrait. Indeed, one can find a resemblance to Christ in the portrait; this was a rather common practice in art at the time. The painting, though small in size and is made in soft colors, is very expressive. Well, I am not going to pretend that I am an arts critic and describe my entire walk through the museum halls. It would not make much sense anyway, because each visitor should have their own, individual approach. 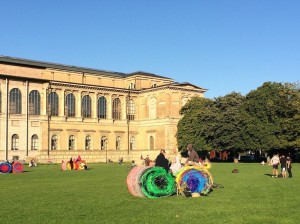 In the Alte Pinakothek, you can see Leonardo da Vinci, Raphael, Rubens and many other outstanding old masters. I only want to mention that in all the halls there is almost no furniture and really nothing besides the paintings on the walls, as was common in the classic Pinacoteca. So nothing distracts visitors’ attention from examining paintings. We spent 3-3.5 hours in the gallery.

In the Alte Pinakothek, there is a cafeteria serving refreshments (coffee and sandwiches), but not any substantial meal. On the lawn in front of the building, you can have a rest on funny benches made of colorful plastic in the form of a haystack. You can pause here during the visit, or just relax after the visit thinking about what you have seen.

The New Pinakothek is located across the street from the Alte Pinakothek. However, visiting the two galleries on the same day would have been too much for us. Personally, I do not like rushing through the museum halls. To really feel and enjoy art one needs at least 4 hours in either of the Pinakotheks. Therefore, it is better to allocate separate days for them. Well, from time to time we return to the Kunstareal, usually on Sundays when the price of the museum admission is purely symbolic, just €1.

The original 19th century building of the Neue Pinakothek had been destroyed during World War II and the present building was built in 1981. I do not find it particularly impressive from the outside; however, the interior is eye pleasing, the halls are spacious, high and bright. This Munich’s museum boasts one of the most unique collections of paintings covering the period from the 18th century to the beginning of the 20th century. German, Spanish, French, English, Dutch and other European masters are represented here. In the Pinakothek’s halls you can see paintings of Goya and Gainsborough or sculptures by Rodin and Picasso, as well as many other famous artists. Of course, it is pointless to try to describe visual art in words. Everyone has their own vision and understanding of art. I am really fond of the Impressionists, and the Neue Pinakothek contains one of the most important collections of the Impressionist paintings. Probably, I am not unique in this regard. The museum halls exhibiting the Impressionists are always crowded.

After spending rather long time admiring The Sunflowers of Van Gogh as well as paintings of Cezanne, Renoir, Manet, Gauguin and other artists, we got somewhat hungry. Fortunately, there is a nice restaurant, Hunsinger, in the Neue Pinakothek building. One can not only get refreshments or a quick snack, but also full lunch in this establishment. We found their cuisine delicious.

Finally, again on a Sunday when one can visit a museum in the Kunstareal for just one euro, we went to the Pinakothek der Moderne. As you can guess from the name, this Pinakothek is a museum of contemporary art. It is the largest and most diverse museum in the Kunstareal. In the spacious and brightly lit building you find the collections of four types of contemporary art: paintings, graphics, architecture and design. Therefore, if you have decided to sacrifice your precious tourist time to the museum visit, it is better not to combine this museum with others, even though they are nearby in the Arts Quarter. Just running through the halls of this Pinakothek for a superficial look at the exhibits will take three to four hours. From my own experience, I can say that it is better to prepare for this museum in advance, at least browse the Internet if you are not keen on reading special literature. Modern art may not be easy to understand, and for an unprepared person it might be simply incomprehensible. Well, art is subjective and probably not everyone will agree with my point of view.

It is rather difficult to single out some major, iconic exhibits in the Pinakothek der Moderne. Almost all directions of the 20th century painting are represented; for example, expressionism (the “Blue Rider” group, including Kandinsky), cubism (Picasso), surrealism (Salvador Dali). There are a lot of works of modern artists; I have to admit that I was not familiar with most of their names before the visit. In fact, each has its own, rather interesting story. I, for example, stopped and carefully examined the work called Vorhang (curtain) by Gerhard Richter . The reason was that I had learned recently that one of the paintings by this German artist was sold at Sotheby’s for 20 million euros. That particular painting went to a private collection. Therefore, we have to enjoy what is still available for the general public.

Some of the museum collections might not be considered art in the strict sense of the word, but they are still very interesting. For example, I liked the exhibits of industrial design, especially automobiles and furniture. This is the largest collection in the world, as one would expect in Germany. Also worth seeing is the collection of the architectural museum. Here one can see the sketches and models of the works of famous architects : Neumann, Le Corbusier and others.