Leopoldstrasse – a Picturesque Boulevard in the Center of Munich 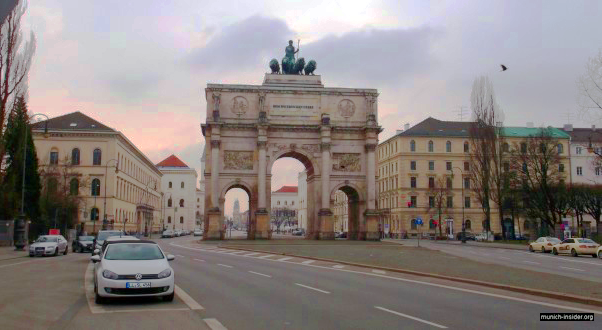 While the Old Town of Munich is a tourist Mecca, the Leopoldstrasse and its surroundings are popular primarily among Munich’s residents. This wide boulevard stretches for several kilometers from the Old Town towards the trendy city district of Schwabing. Actually, in the Old Town this street begins from Odeonsplatz as Ludwigstrasse and becomes Leopoldstrasse at Siegestor. The street is wide and very lively, with elegant mansions on both sides, and cafes and restaurants at every turn. Night life is always in full swing here, and find a free table can be problematic. We usually reserve a table in advance.
From the 19th century, wealthy Munich citizens built mansions and villas on Leopoldstrasse. Plenty of those are also located in the surrounding side alleys. For the curious wishing to take a glance at private life of the rich it might be interesting to walk along Leopoldstrasse. Besides elegant private residences, there are also attractions worth mentioning.

The tradition of boasting victorious wars and their heroes by erecting special gates or arches goes back to Ancient times (Arch of Constantine in Rome is a good example). In the new times, such monuments became fashionable all over Europe. The Arc de Triomphe in Paris is probably the apotheosis of such architectural extravagance. The arch on Leopoldstrasse in Munich is more modest, but still impressive. It is located at the very beginning of the street, where Ludwigstrasse becomes Leopoldstrasse. This mid-19th century architectural creation was severely damaged, almost destroyed during World War II, but has since been restored. As usual for this type of structure, the monument is engraved with numerous inscriptions glorifying war victories and their heroes. However, it bears a contemporary dedication as well: “Dem Sieg geweihnt, vom Krieg zerstört, zum Frieden mahnend” (dedicated to Victory, destroyed by War, calls for Peace). This is, apparently, intended to remind the Germans about their recent history. 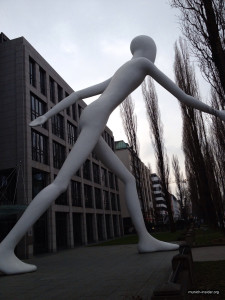 A couple of blocks from Siedestor, you can see a very interesting and unusual sculpture depicting, in a stylized form, a walking man. This fiberglass-covered steel structure is 17 meters (56 feet) high. It was made in the USA by avant-garde sculptor Jonathan Borofsky. The sculpture was brought to Munich in parts and assembled on site. 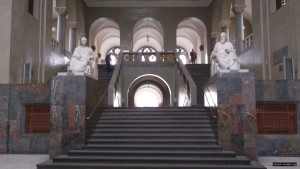 The main complex of the University buildings is located near Siegestor. It is one of the oldest German universities, established in the 15th century. Nowadays, the Ludwig-Maximilians University is one of the best higher education institutions in Germany. About 50 thousand students attend classes here. One can find many famous as well as infamous names among its graduates, including such antipodes as Pope Benedict XVI and Heinrich Himmler.

There are a few other interesting places in this area of Munich which is not as crowded with tourists as the Old Town. We usually come to Odeonsplatz in the late afternoon or evening on the subway (U-Bahn) and then walk along Ludwigstrasse and Leopoldstrasse to the Münchner Freiheit subway station. This is the most beautiful section of the famous boulevard and the attractions mentioned above are all located here. After a relatively short walk (a little over 2 km or about 1.5 miles) we settle down in one of cozy restaurants, which are abundant here and can satisfy all tastes and budgets.