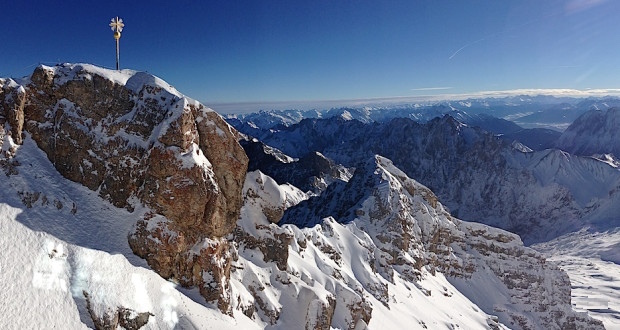 Insider’s tips: The temperature that day was 28°C (82°F) in Munich and 8°C (46°F) on the mountain; take a jacket with you. Sunny day is recommended for the trip to fully enjoy the views from the summit. If there is a lot of tourists, it is important to take a token for the return ride immediately upon arrival at the summit, otherwise you may wait up to 2 hours in line for the ride down.

Zugspitze – the highest mountain in Germany 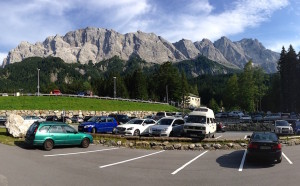 Germany, as its neighbours to the south, boasts magnificent Alpine peaks, and one of them, the highest and steepest, draws crowds of tourists from around the world. We are talking about the Zugspitze mountain, which reaches almost 3,000 meters (almost 10,000 feet) in height. The mountain range with this famous peak is located near the ski resort of Garmisch-Partenkirchen. This town is known, first of all, as the site of the 1936 Winter Olympics. Zugspitze is not only a site for downhill skiing, but also a major Alpine attraction per se, so it is interesting for tourists in any season. For example, we first went there in August, on a warm sunny day. It was +28°C (82°F) in Munich and at the summit, which is only 100 km from the city, it was only +8°C (46°F). So, it would not hurt to pack sweaters and jackets even in the summer.

From Munich to Zugspitze

We left Munich around 10 o’clock in the morning and arrived to our detination shortly after 11 am. A couple of words about the road. At first, it is a frisky drive on the A95 autobahn which goes in the direction of Garmisch-Partenkirchen and farther to Innsbruck in Austria. However, the high-speed section ends at Garmisch, so you have to continue on country roads (Landstrasse) where traffic jams (Stau) are quite frequent. Therefore, it is difficult to predict the travel time, and if you need to be there at a certain time, it is better to start earlier. On that particlar day we were lucky and did not encounter any traffic delays; so it took us 1 hour 20 minutes to get to Zigspitze. There are two options to “conquer” the Zugspitze peak for those of us who are not mountaineers and rock climbers: a cable car or train. The latter option may seem apropriate for those who are completely lazy, but in fact this railroad is very interesting and unusual. I will discribe it later. We chose the cable car and, therefore, parked our car in the village of Eibsee, where the starting station of the cable car is located. We had to stand in two lines: one – to buy tickets, about 5 minutes, and the other – to the cable car itself, which was about an hour long. The adult ticket costs €52, children under 6 – free. By the way, there were many children and they were allowed to take even baby strollers into the cable car.

Zugspitze cable car and the 360° panorama on the summit 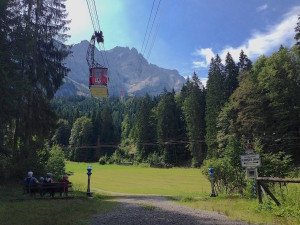 The cable car ride up was already quite an entertainment. At first, it moved not straight up, but diagonally, and seemed rather slow. So, we just relaxed and enjoyed the Alpine views around us. Suddenly, somewhere halfway up, the gondola accelerated and went up steeply. We felt as if on a roller coaster. Wow … I almost felt that my heart was in my throat. The entire journey was hardly longer than 15 minutes, but it left quite a long-lasting impression. The cable car brought us almost to the top of the mountain. In fact, it was still a couple dozen meters (by height) to the summit proper. A walking path led to the top and we could see a gilded cross there. The cross marks the highest point – 2962 meters (9741 feet). Quite a few people wanted to climb to it and we went too. I must say the path is pretty steep and rocky, so a pair of suitable shoes is a must. It was also chilly and windy, but we were determined to “conquer” the mountain. 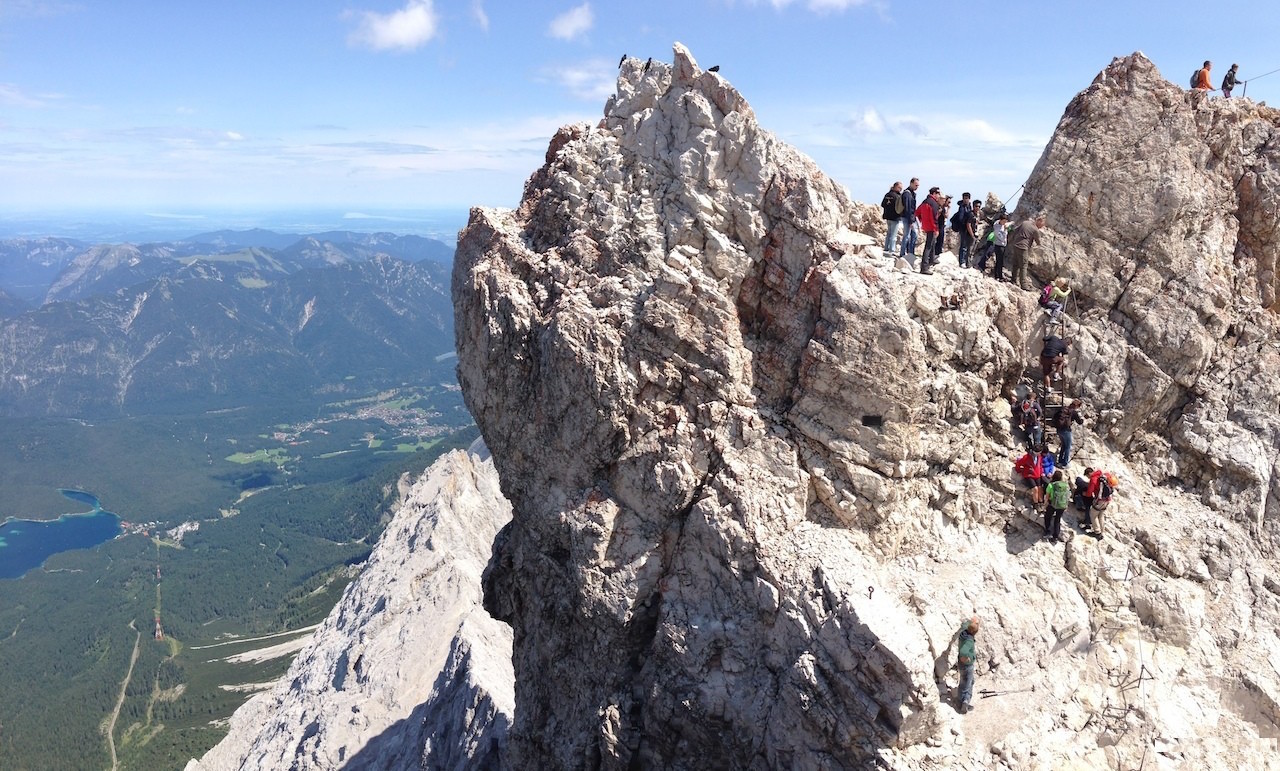 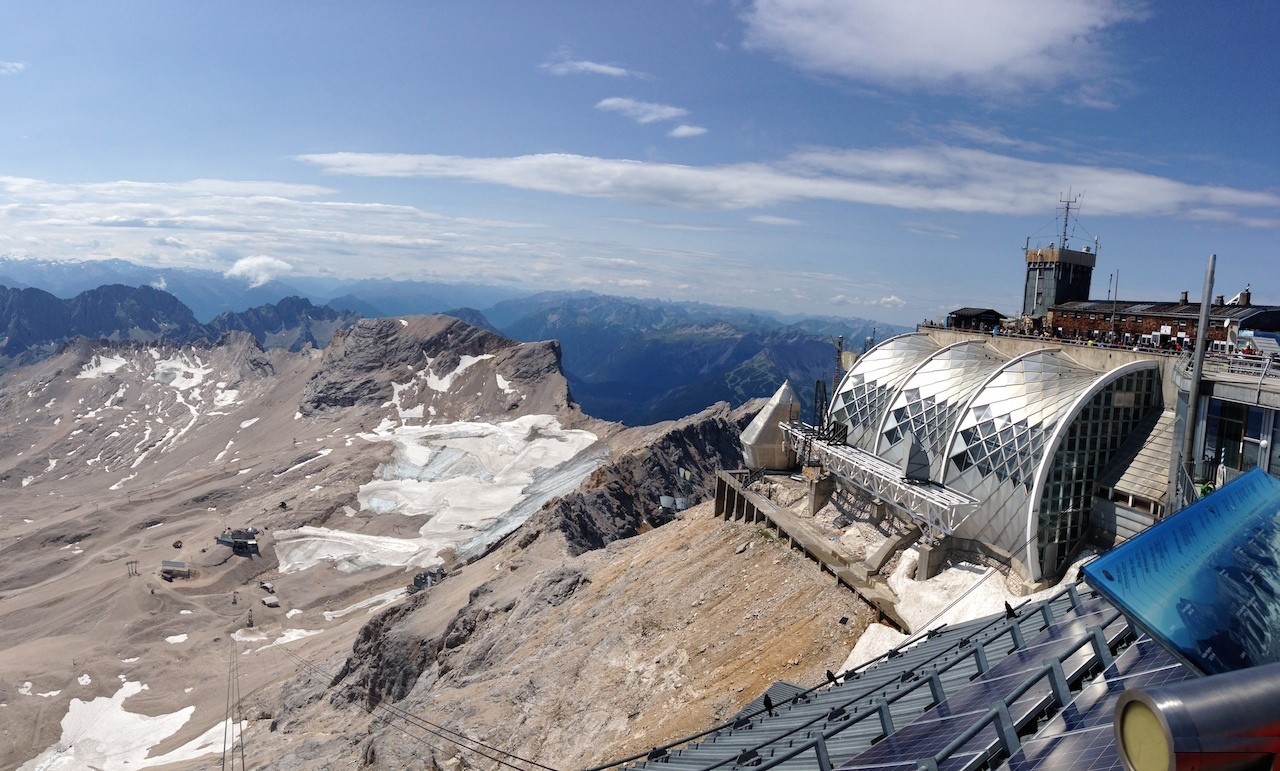 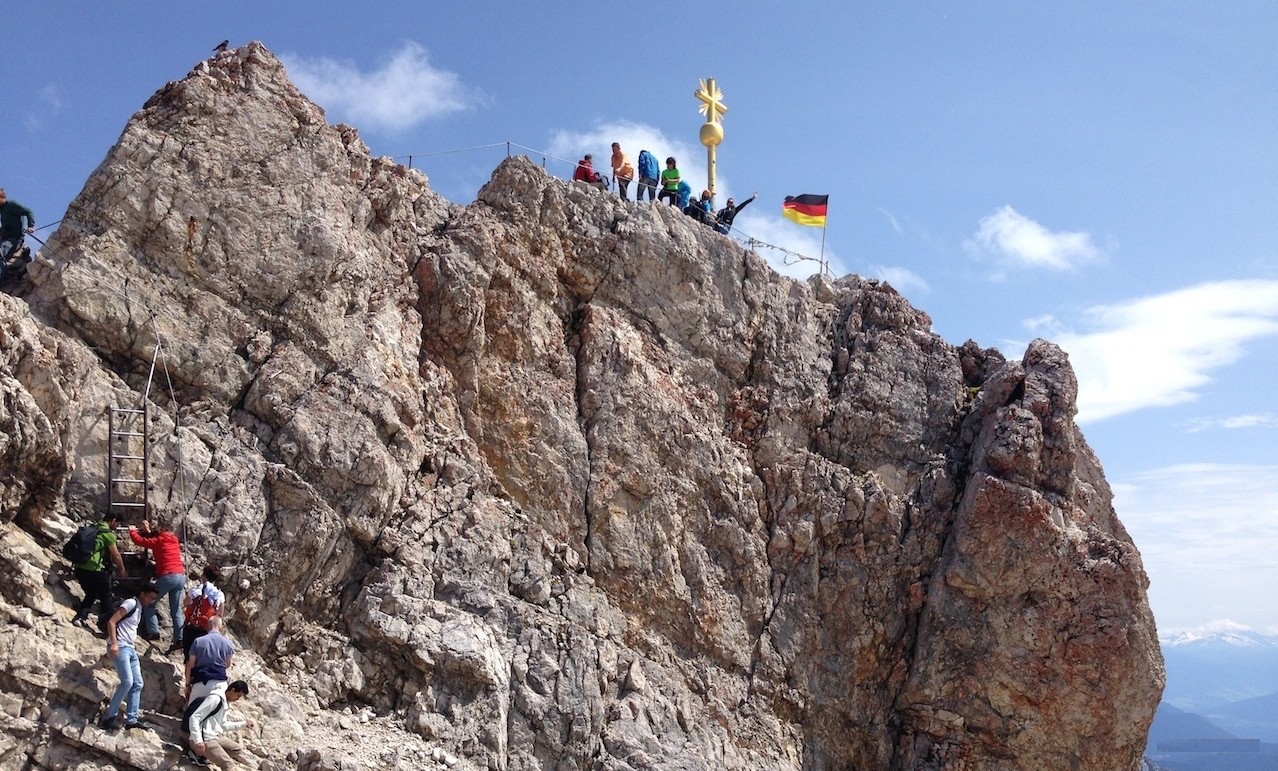 The views from the summit were so spectacular that I think one has to enjoy them at least once in a lifetime. I do not know whether there is any other place on Earth, or rather a geographic point, from where one can see four different counries. Zugspitze is such a point, from its top you can see Germany, Austria, Italy and Switzerland (actually, mountain peaks in these countries). Oh, I almost forgot about Liechtenstein; after all, is also an independent state, even though a “dwarf” one. I know it is in the Alps, squeezed somewhere between Switzerland and Austria, so Liechtenstein should be visible from Zugspitze. We were standing there for a long time peering at the distance, but, frankly, it was impossible to understand which country is where and to discern any international boundaries. And is it necessary? It is clear, of course, that Germany is to the north, and the mountains there are not as high. The other countries are to the south, and the peaks there are considerably higher. Glacial lake Eibsee with its shiny mirror surface was clearly visible at the bottom of the mountain. Overall, the views of the Alps were astounding. We admired them from the observation deck until we chilled to the bones. We also got pretty hungry and went to restaurant “Gipfelalm’, right there on the mountain. We spend there 2 hours enjoying Bavarian food and beer. Well, it was finally time to descend.

The descent back to Eibsee – it is a separate story

We almost got stuck on the mountain, which I blame on the lack of information (or more precisely, insufficient research in advance on our part). There were many people that day on the summit, so to avoid crowds at the cable car station, the staff were issuing tokens with indicated time of boarding. We were late to realize that and could only get tokens for one of the last runs, scheduled for 6 pm. It was only 4 pm and we were not inclined to spend another two hours in the cold there. Fortunately, it turned out that there is always an alternative for latecomers. From the summit, one can descend 300 meters to the Zugspitzplatt glacier on a small cable car called “Gletscherbahn”. The railroad, which I mentioned above, goes from the bottom of the mountain to Zugspitzplatt and back. So, we used this route to get to our car parked in Eibsee.

Now it is time to describe, as I promised before, this mainatin railroad. It is called Bayerische (Bavarian) Zugspitzbahn and goes from Garmisch-Partenkirchen to the Zugspitzplatt glacier, the last station is called Gletscher-Bahnhof (Glacier Train Station). The journey from Garmisch-Partenkirchen takes about an hour, and it is about 30 minutes from Eibsee (one of the intermediate stations). On the last section of the railroad (which we used to get back from the mountain), the train goes mainly in the tunnel, so you cannot see much. However, it is comfortable and is also convenient for skiers. The train makes several stops right at the chairlifts to the ski slopes. From the Grainau station, the conventional rail track changes to the so-called gear-toothed rail track, which allows the trains to climb the mountain. I must say that it is a fairly steep climb. The principle is rather simple: There is an additional toothed rail between the two conventional rails. The train cars are equipped with special gear wheels which engage with the toothed rail. Well, the principle may be simple, but is not that easy to implement; so it is yet another example of German engineering. This railroad is really unique, so it is worth to take a ride. 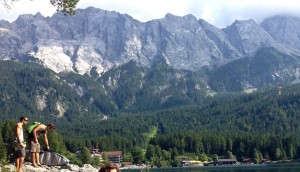 In Eibsee we walked for about 20 more minutes on the lake shore. Water in the lake is crystal clear, it comes from the glaciers. The sun that day was hot and a lot of people were sunbathing on the beach; many were even swimming in the lake. One can rent a boat or catamaran to supplement the mountain trip with the water adventure. However, we were already somewhat tired and wanted to go home. So, we just relaxed and watched others at this heavenly place.

In conclusion, I can say that it was a wonderful day spent in the mountains.

The ski season on Zugspitze 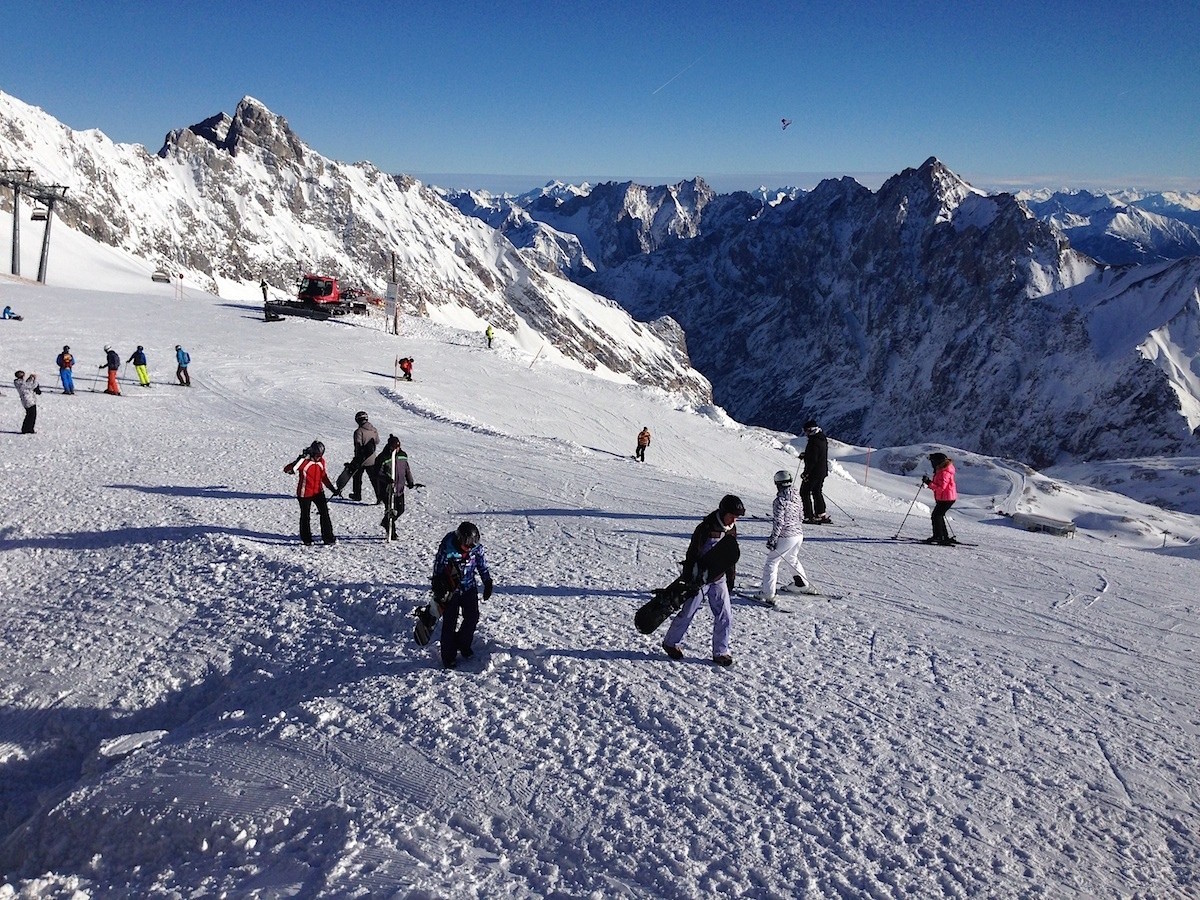 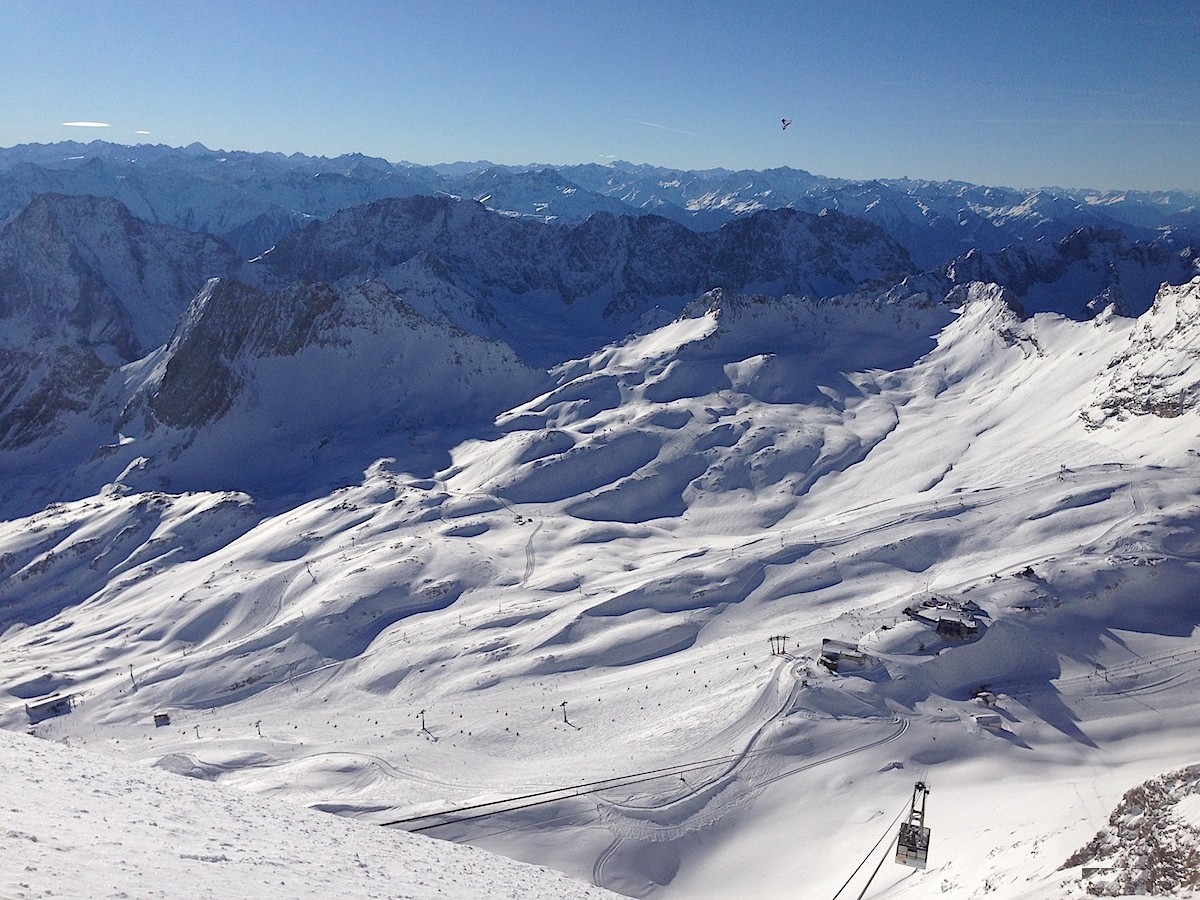 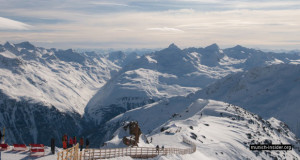