﻿Neuschwanstein and Linderhof Castles: a car trip from Munich to Schwangau 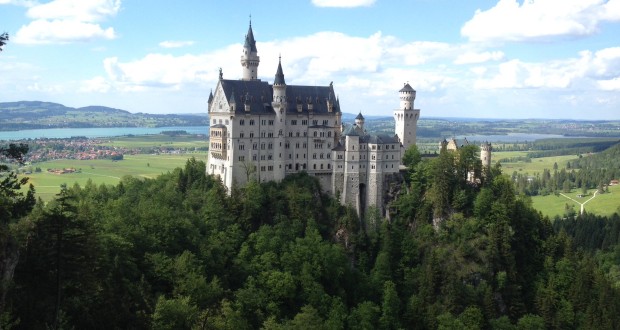 
Open map in a new tab

The road from Munich

We took the A95 autobahn in the direction of Garmisch-Partenkirchen. On the way, we decided to see typical Bavarian towns and villages, and turned in the direction of Starnberg. Of course, we lost some time, but it was worth it. The town of Starnberg is located on the north shore of Lake Starnberg. Gorgeous views of the Alps are opened from the lake shore. We stayed in Starnberg for 20 minutes. There is a parking lot at Hauptbahnhof (train station), which is located right on the lake. The town is small, beautiful and very popular among Munich residents in the summer holiday season. By the way, because of its geographical location and proximity to Munich, the real estate prices here are ones of the highest in Germany. In the western part of the town, on the lake shore, it is about 17,500 euros per square meter (1 sq.meter ~ 10 sq.ft).

After admiring the views, we continued our journey in the direction of Weilheim and Murnau. Driving along the western shore of the lake, you can enjoy typical Bavarian nature – green meadows and the Alps with snow-capped peaks in the distance. Near Oberau, we turned onto the B23 road and continued in the direction of Ettal. 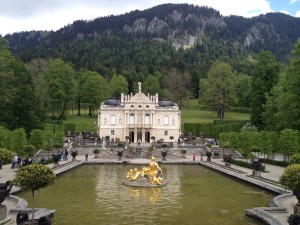 The Linderhof castle is situated in the Ettal valley, about 10-minute drive from the Austrian border. It was the smallest but favorite castle of King Ludwig II of Bavaria. Linderhof is also called the Bavarian little Versailles. If there is the “little”, there should be the “big” elsewhere. Indeed, there is such a place in Bavaria, it is a palace on Lake Chiemsee. The Linderhof castle is small, but very cute and cozy. King Ludwig built it as a personal refuge, a kind of a royal “hunting lodge.” I found the tour of the castle as well as adjacent houses and a small cave rather interesting. Especially I liked the cave, which is called the “Grotto of Venus”. King Ludwig used to listen to Wagner’s operas here in seclusion. BTW if you are going to go to Neuschwanstein afterwards, I would not spend too much time in Linderhof. Save some energy, you will likely need it in Neuschwanstein. However, if you want to have a meal, it is better to buy some snack in Linderhof. Even though there are lots of tourists here, it is still not such a pandemonium as in Neuschwanstein.

The two castles are not that far apart, about 16 kilometers (~10 miles) as the crow flies. However, you cannot drive directly through the mountains and will have to make quite a curve. The shortest route, about 50 km (~30 mi) long, actual goes through Austria, first along the northern shore of Lake Plansee and further in the direction of the towns Reutte and Füssen. 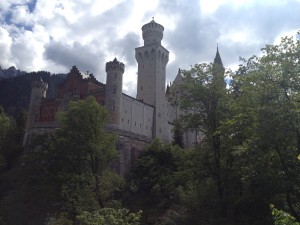 <The Neuschwanstein (“New Swan Rock”) castle is situated in the Schwangau valley about 120 km from Munich and 50km (the shortest road) from the Linderhof castle. They have enough parking spaces and it is a set price whether you leave in an hour or stay the entire day there. From the parking lot to the castle, you have to walk uphill almost half an hour. You can get into the castle only with a guided tour; the tickets are sold at the bottom. Usually, there is a long line and you can stand there for up to an hour. Therefore, it is recommended to buy tickets online or through your hotel. The tour starting time is indicated on the ticket.

Now, a few words about the tour. The Neuschwanstein Castle appearance as well as its interior really impress by striking beauty and an abundance of luxury. The tour guide will give you a lot of diverse information, some of which may not always be clear to unprepared listeners. Therefore, it is better to read a little in advance about King Ludwig II, this castle, its construction and everything connected with it. I will only mention that the entire interior decor is based on the biblical stories, German legends and operas of Wagner, whom Ludwig adored. They say that Tchaikovsky was tremendously impressed by both the castle and its name, and it was here that he conceived his famous “Swan Lake” ballet. There are many legends associated with Neuschwanstein; the most recent one is from the time of World War II. Allegedly, the Nazi gold had been stored here and then disappeared without a trace. One of the strongest impressions for me after visiting Neuschwanstein was spectacular views of the surrounding Alps. It is really a fabulous, fairytale place.

Lastly, a tip regarding snack if you get hungry. It is better to have a meal at the top, there is a good small restaurant on the way to the castle. We tried twice a cafe at the bottom of the hill and were disappointed – the food and service there are intended for tourists only, in other words, expensive and not very good.