Current and Historical Weather in Munich 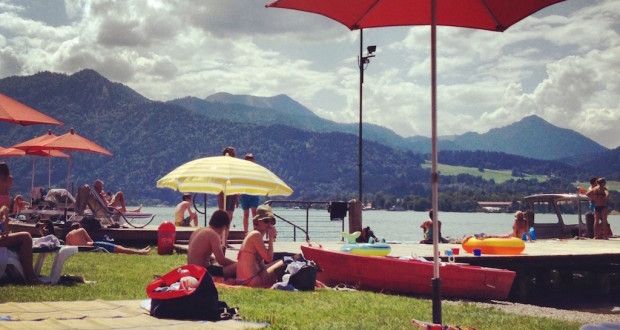 Current weather in Munich and forecast for the week

Munich’s climate can be briefly described as follows: mild winters and moderately warm summers. Winter is from November to February; the temperature usually is slightly below freezing at night and just above freezing during the day. Some years though, there could be a couple of weeks when the temperature drops to -20°C (-4°F). Usually, the snow lies on the ground for about a month and a half. During the other, warmer seasons it is rather humid with frequent rains, as is typical for the entire Germany.

Some interesting weather metamorphoses associated with the proximity to the Alps are observed in Munich. For example, I once left the city for the Zugspitze mountain which is only 70 km (43 mi) from Munich. It was a warm summer day, about +25°C (77°F) in Munich. Well, I was shivering in my summer clothes on the mountain where it was only 0°C (32°F).

A rather interesting weather phenomenon, called Foehn, happens sometimes in the winter in Munich. It is similar to Chinook in western North America. The cold air coming down from the Alps through the valleys and gorges is gradually heated and becomes warm when it reaches the city. Your face feels a warm wind as if from an electric hair dryer.

Munich is relatively far from the sea and the climate is mostly continental. The absence of the sea is compensated by a large number of beautiful lakes. The lake beaches are occupied by the city folk from May to August. Starnbergsee, Königssee, Chiemsee, Tegernsee – these are all mountain lakes, so the water is quite cool, but crystal clear. On warm summer days the water warms up to +20°C (68°F) and it is a real pleasure to plunge into it.