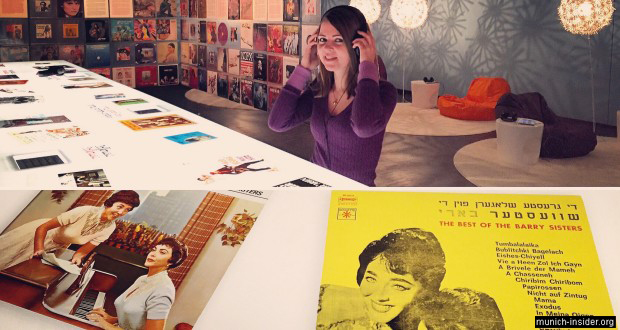 In the center of Munich, not far from Viktualienmarkt, there is a small square called St.-Jakobs-Platz. Since about a decade ago, it has been attracting tourists from many countries thanks to a complex of buildings exhibiting interesting and unusual architecture. The complex includes the Ohel Jakob Synagogue, the Jewish Community Center and the Jewish Museum. 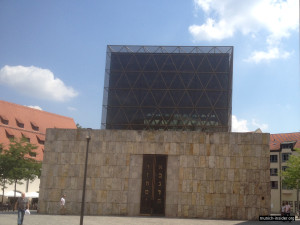 The synagogue is constructed as two cubes, one atop of the other. The lower part is built of limestone and is windowless, it resembles Jerusalem structures. The cub atop is made of glass and symbolizes a hut or a tent of the ancient Israelites. The Jewish Museum is built in a similar style, but as it were in reverse order. The building is shaped as a cube with a transparent lower level topped with a massive windowless upper part. When we got inside, we understood the architect’s idea. The ground floor, brightly lit and appearing rather conventional, houses box offices, cafe, bookshop and other stuff usually located at a museum entrance, as well as some permanent exhibits. The main exhibition halls are on the second and third floors. They are designed to shield the visitor from the outside world and to immerse in the world of Jewish history and culture. Well, at least it is our understanding of the symbolism of this place. 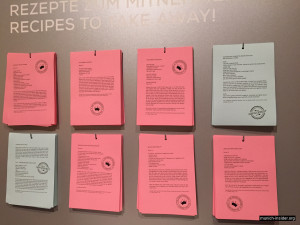 The museum primarily gives information about Jewish history in Munich, but not only. The exhibits are intended not only to be viewed, but also to be read and heard. Here are just a few examples: kosher food recipes, records of Jewish music (such as, the famous Tum Balalaika by the Berry sisters), a library of rare books in Yiddish and Hebrew. They also have books in the Sephardic language, which was the language of the Spanish and Portuguese Jews. There is an expansive collection of artifacts of Jewish religious life: various editions of the Torah, menorahs, yarmulkes, etc. Interestingly, I found some things I had never seen before, such as a small gilded stick to turn the pages of the Torah, which cannot be touched by hand, and knives for circumcision. In short, the museum shows the unique, rich and highly distinctive history and culture of the Jewish people.