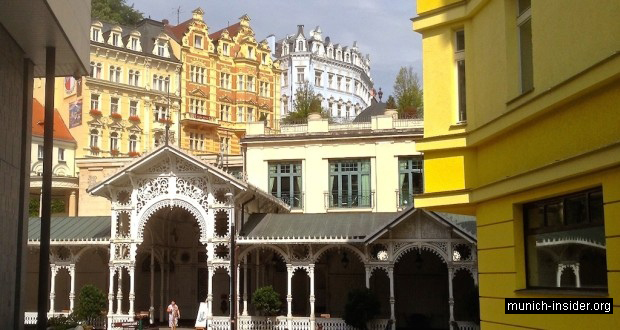 This town, nestled in a mountain valley in northwestern Bohemia, is one of the most popular places for spa treatments as well as for leisure visits in Central Europe. Nowadays, this resort is called Karlovy Vary which is almost a direct translation of the German name Karlsbad (usually spelled in English as Carlsbad). It is located about 300 km from Munich and can be reached by car in about 3 hours. We have been to Karlovy Vary several times for short 2-day visits. The present article describes one of such trips.

It is an easy and pleasant drive from Munich to Karlovy Vary; the route goes almost all the time on German autobahns, only the last leg of about 60 kilometers lies in the Czech Republic. This last leg is a toll highway, as are all Czech expressways. The vignette for a minimum period of 10 days costs €12; we bought one at a gas station in Germany.

The small pretty town of Karlovy Vary is sandwiched from two sides by the Ore Mountains, which are quite high for the Czech land. Most of the tourist attractions and spa hotels are located in the valley, on both sides of the Teplá River. The main promenade stretches along the river and passes all 12 famous mineral springs. All the springs are free for visitors. However, for special spa treatments and wellness programs one needs to check in one of the sanatoriums or spa hotels.

It should be noted that it is rather difficult to find a parking spot in this mountain town. We found a good parking next to the bus station near the Albert supermarket (address for GPS navigation: Horova, 360 01, Karlovy Vary). The town is very compact and all attractions are within walking distance, so the car is required only for arrival-departure. It is about 5 minutes’ walk from the parking to the central promenade which stretches for 2 kilometers (1.2 miles) along the river and ends at the Grandhotel Pupp.

Every time I come to this resort, it is always a pleasure to stroll among the glittering splendor of facades of hotels, shops, theaters and mineral water pavilions. There are about a dozen hot springs located along the Teplá river promenade. Special pavilions were built to cover the mineral water sources. These are beautifully designed structures with columns; indeed, they are called “colonnades.” The lists of diseases each spring can cure are posted, but anyone can drink “healing waters.” We have tried all of them; mineral waters have a rather pleasant flavor, without any taste or odor of sulfur. I do not feel any difference between different springs, except that the temperature ranges from 30 to 72 degrees Celsius (86-162F). Indeed, they say that mineral waters in different sources in Karlovy Vary have similar basic chemistry, though have different curing effects due to different temperatures and carbon dioxide content. Particularly impressive is the hot spring (geyser) in the central pavilion, next to the Church of St. Mary Magdalene. It strikes to a height of 10-12 meters (33-40 feet). It is recommended to stay for 10 minutes near it inhaling warm water vapor, which we always do. 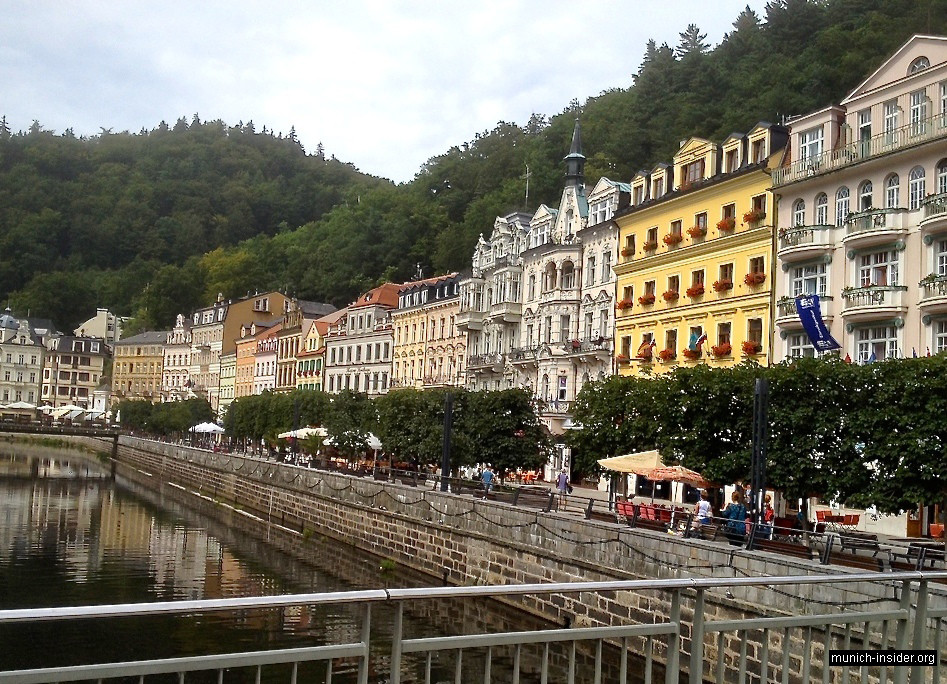 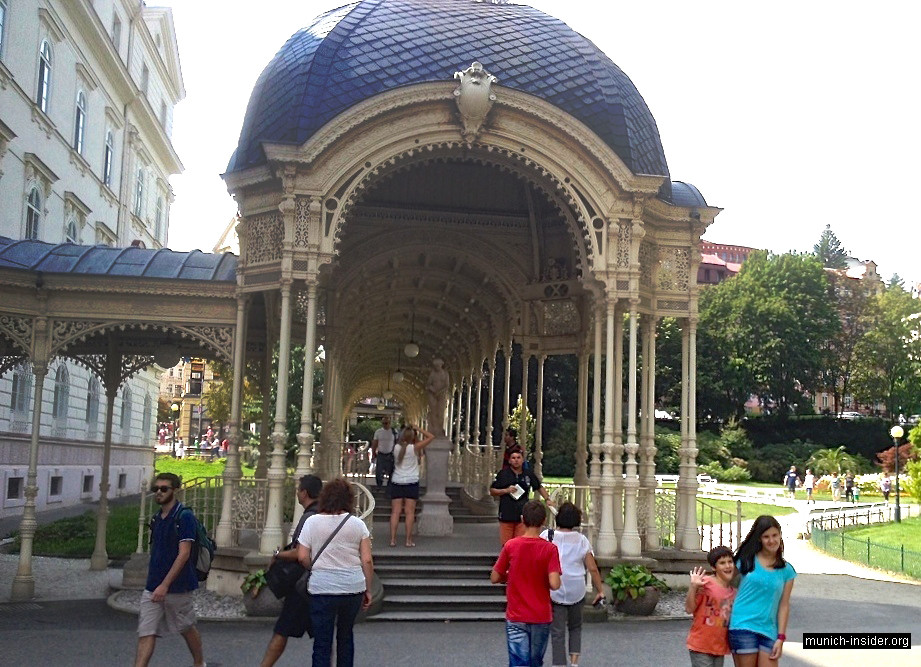 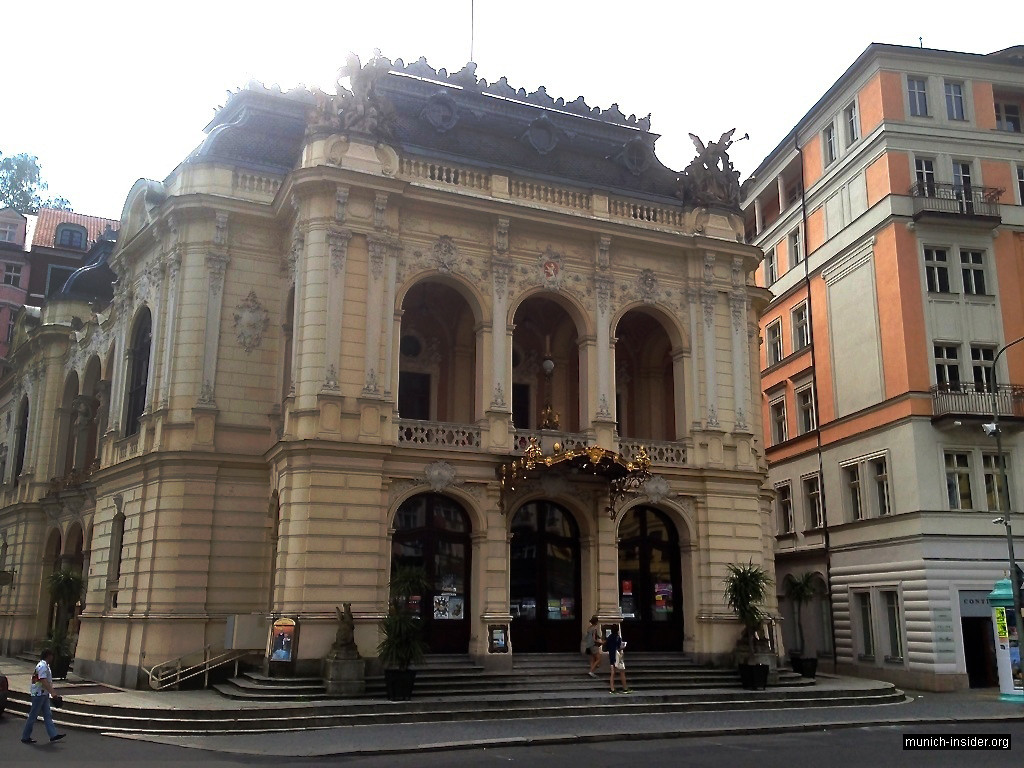 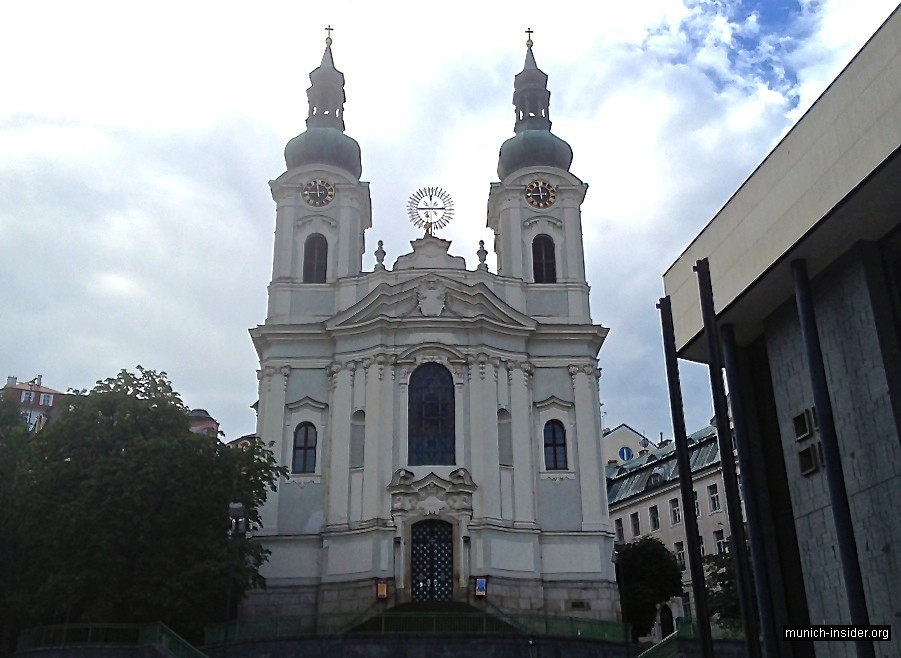 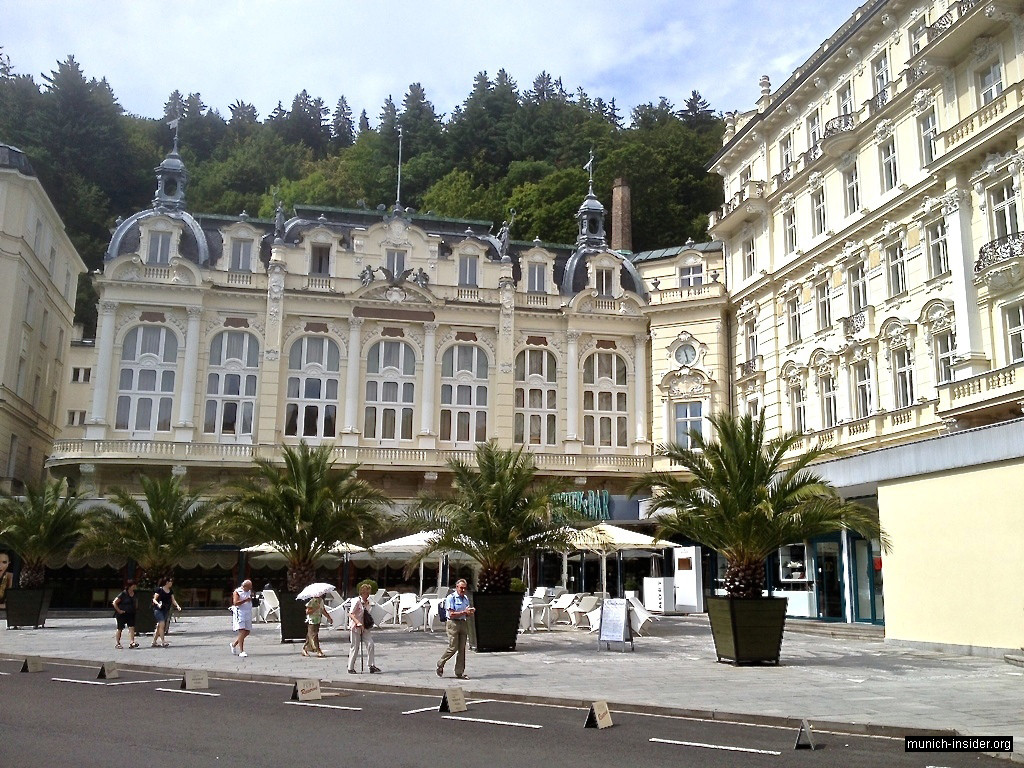 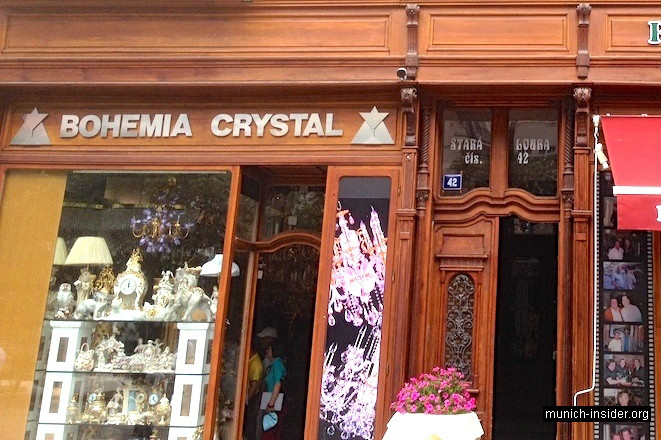 As I have mentioned, the buildings along the promenade are gorgeous, they are mostly in the baroque style. This is understandable, because many of them were built in the days of the Habsburgs when the Czech land was part of the Austro-Hungarian Empire. Some buildings are really unique, such as the Opera House. But the real masterpiece, in my opinion, is the complex of buildings of the luxury, five-star Grandhotel Pupp, which occupies a huge area at the southern end of the promenade. Over the years, many celebrities have stayed here. Movie producers and directors like this hotel. Not only the annual Karlovy Vary International Film Festival is held in the Grandhotel Pupp, but also episodes of such box office hits as Casino Royale, Edith Piaf and many others were filmed in its halls. I hope to book a room in this hotel someday…

From the Grandhotel Pupp we headed towards the Diana Observation Tower to have a look at the city from a bird’s eye view. The cable car (funicular) took us to the top of the hill where the tower is located. One can climb the stairs or take the elevator (which we did) to the tower’s observation deck. On the deck you immediately feel the atmosphere of the surrounding mountain landscape with unique clean air and breathtaking views of the valley below. Of course, this is not the Alps, but there is a special beauty in this corner of Europe: softly rolling mountains with rounded summits covered with lush vegetation and a neat town on the banks of the river below. Everything is peaceful and quiet, feels almost like paradise.

There are quite a few fashion boutiques on the central promenade and I would have spent considerable time browsing through them. However, being with my husband I had to enjoy mostly window shopping. Nevertheless, I could not miss one store selling famous Bohemian glass. We bought a beautiful vase as a souvenir from this visit. We also found one of the places that some joking call the thirteenth source. They sell the popular local liqueur Becherovka; 38 are its posted degrees, but this time it is the alcohol content and not temperature. Becherovka is produced with different flavors; we bought a bottle with lemon flavor as another souvenir.

Usually, we stay in one of the 4-star hotels in Karlovy Vary, but this time we decided to book lodging out of town. The spa hotel Zámek Lužec (Lužec Castle) is located in the hills about 15 km (9 mi) north of Karlovy Vary. It is a pleasant 20-minute drive on a country road through the Czech contryside and in the woods. On the Internet, the hotel is advertised as a restored medieval castle of Czech nobility. I would say that the Middle Ages are mostly stylized, but the hotel is still a classy 4-star lodging. 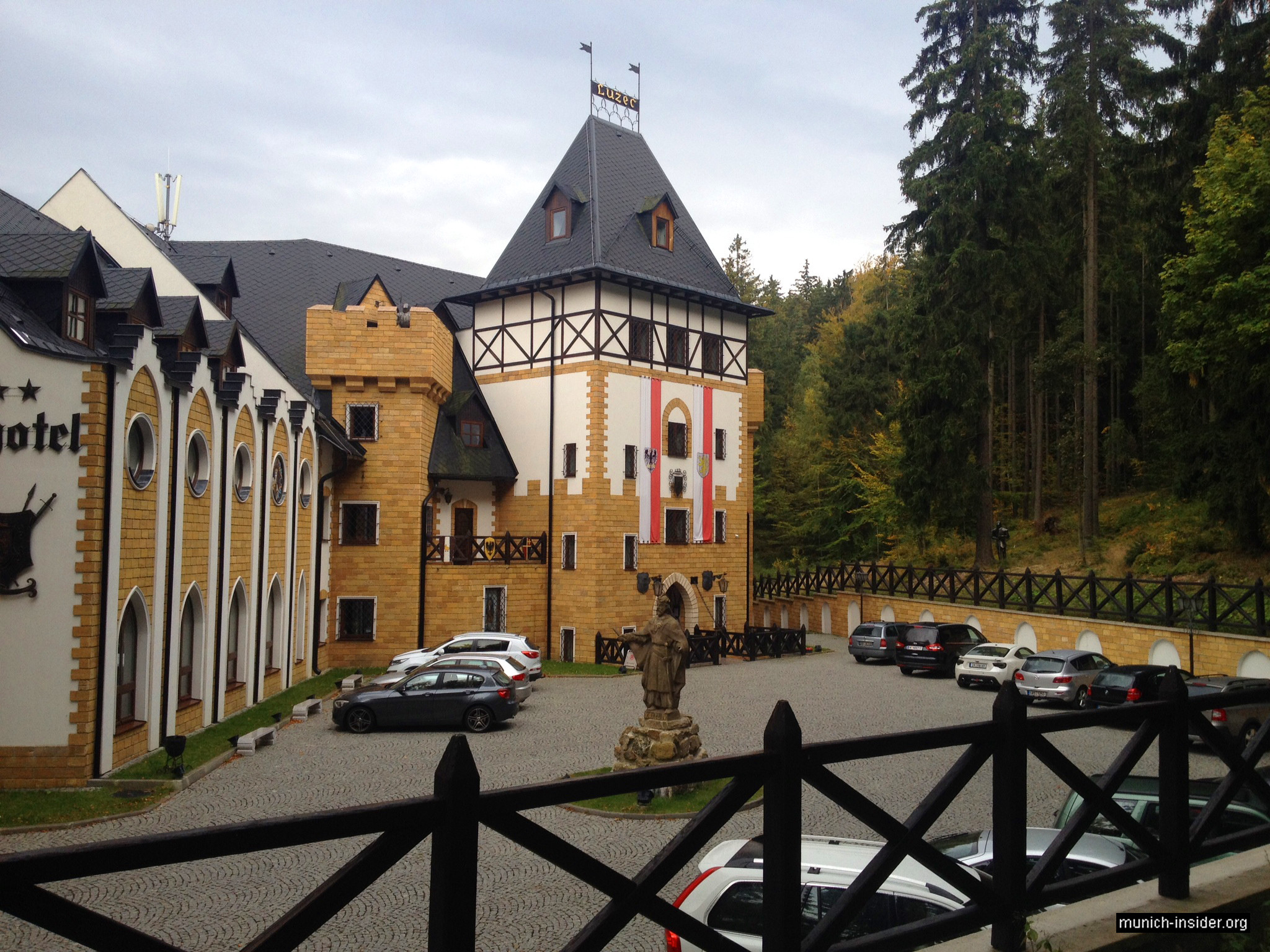 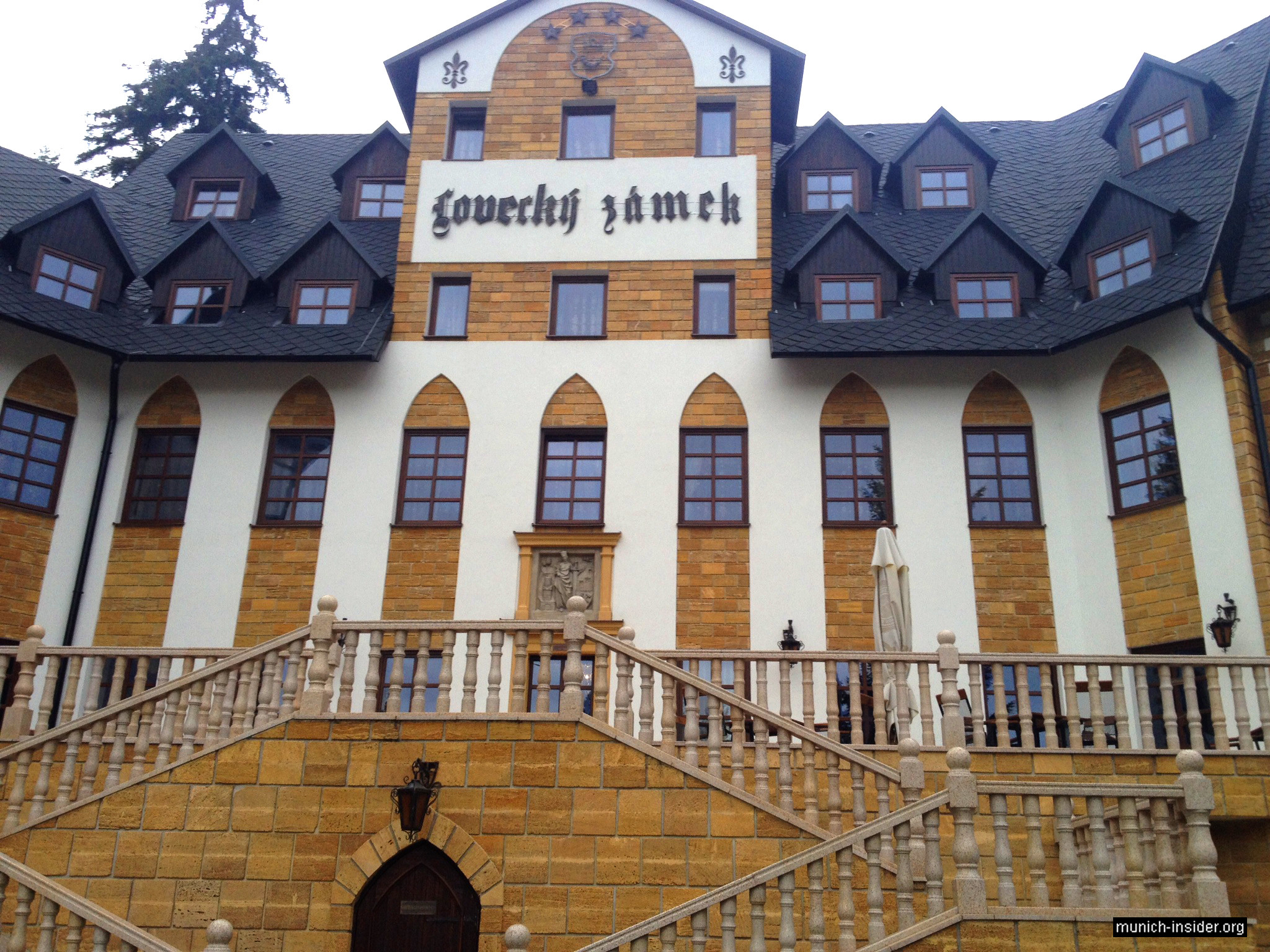 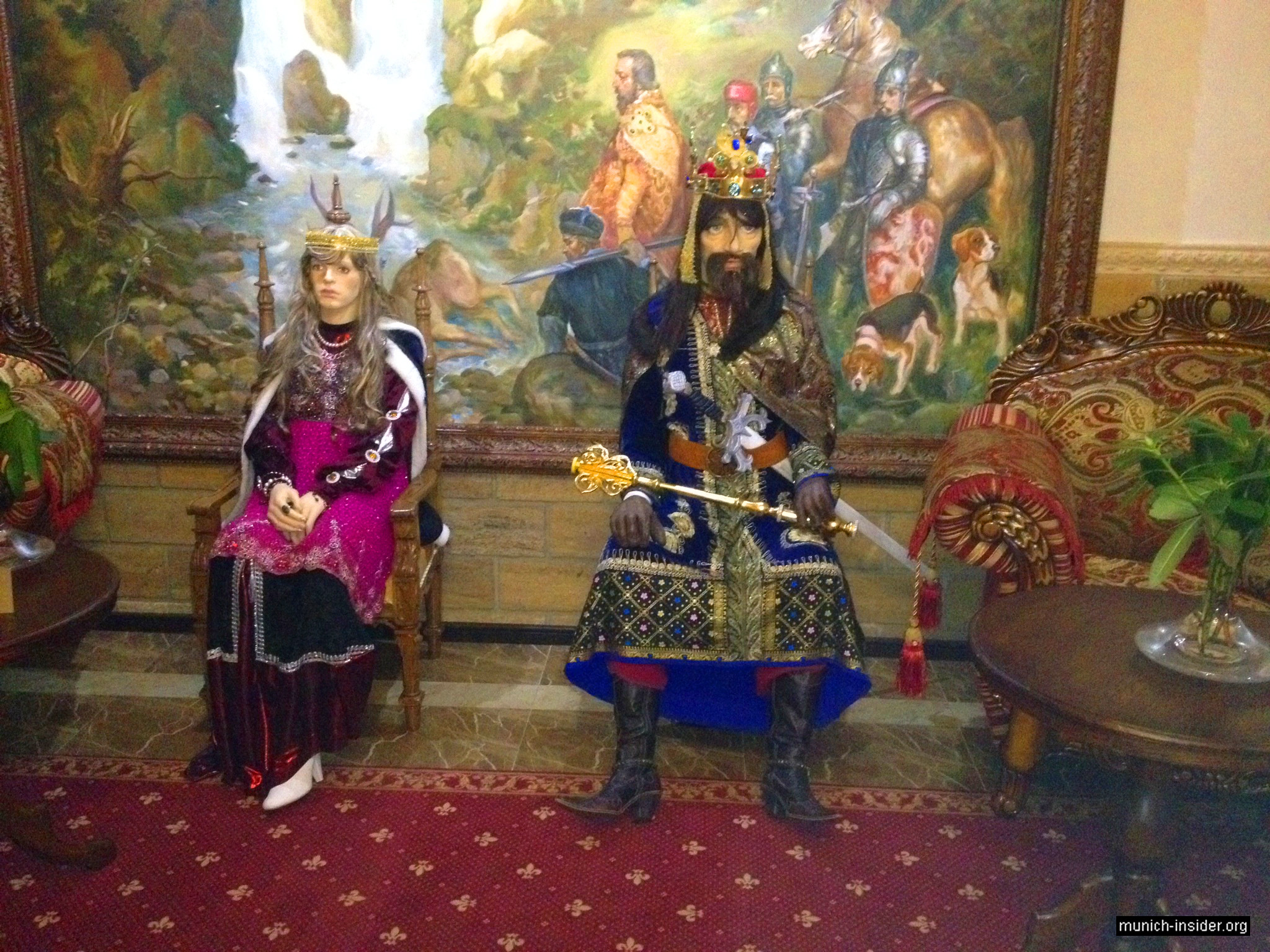 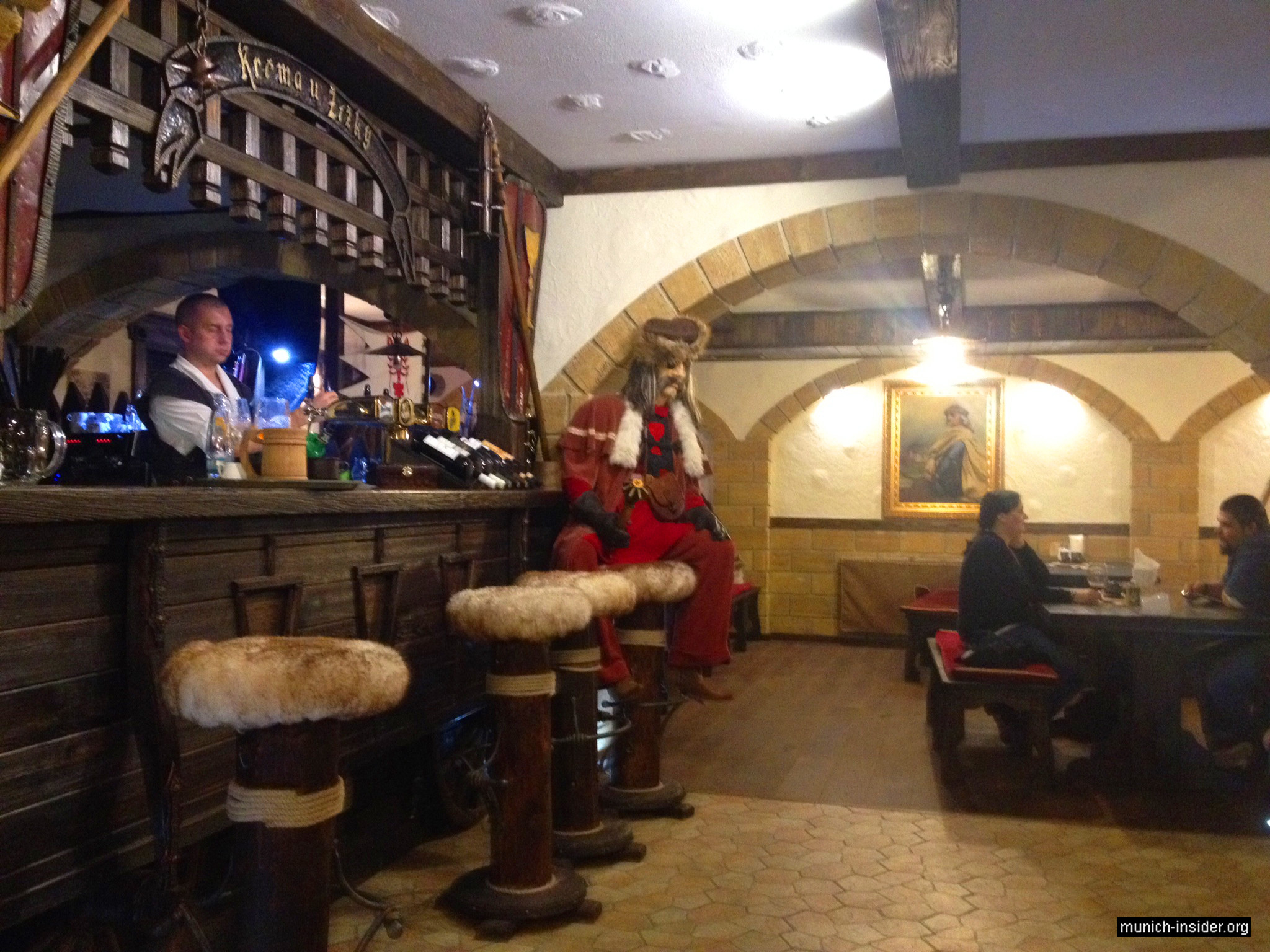 One of the hotel’s restaurants, Středověká krčma, is stylized as a medieval tavern. We had nice dinner in this tavern. They serve mostly Central and Eastern European dishes, which are delicious. Czech beer, of which they offer two brands – Plzensky Prazdroj (Pilsner Urquell) and Kozel, is also very good. The bill for the dinner was more than reasonable, about €12-15 when converted from korunas.

After dinner, we still had time to go to the hotel spa. We spent 1-1.5 hours there enjoying the pool and sauna. The next morning before breakfast, we went to the pool again. The breakfast, which was included in the lodging price, was in the Královská (Royal) restaurant. The restaurant name maybe somewhat pretentious, but the breakfast was indeed delicious.

We left the hotel around noon and headed to the last point of interest on this trip – the Loket Castle.

The Loket castle or rather fortress is located 23 km (14 mi) from the spa hotel Zámek Lužec. It is very close to the expressway back to Germany, and we reached it in less than half-hour. The fortress stands on a hill overlooking the small Czech town of the same name. It is located at the bend of the Ohře river which resembles an elbow (loket means elbow in Czech). In the Middle Ages, the Loket fortress served as a border outpost protecting the Czech lands from the German invaders. It is an impressive, though somewhat gloomy structure. We did not have to climb uphill on foot; one can drive straight to the fortress and park the car in the courtyard. Admission costs 100 korunas or €5; actually, this does not correspond to the exchange rate – it is cheaper to pay in korunas. I must say that it is really worth visiting this attraction for this small entrance fee. Besides well-restored ceremonial halls on the second floor of the castle featuring frescoes and medieval furniture, there are very interesting museums. One of the exhibits in the local history museum attracted our attention. It is a large black stone and a smaller fragment broken from it. The caption says that it is a meteorite that hit the ground nearby centuries ago. Indeed, the stone has an unusually appearance – black as pitch with a smooth surface; so we did believe that it was a meteorite. In general, the fortress is full of mysteries and artefacts. Some of them are rather funny. For example, in the courtyard there is a sculpture of a gnome, called Gottstein, with a long protruding chin or beard so that the figure resembles a bird with a long beak. They say that if you rub this beak-beard and make a wish, it will certainly come true. To be sure, one should also leave a few coins. Well, we performed the entire ritual and are now awaiting only good things in life 😊. 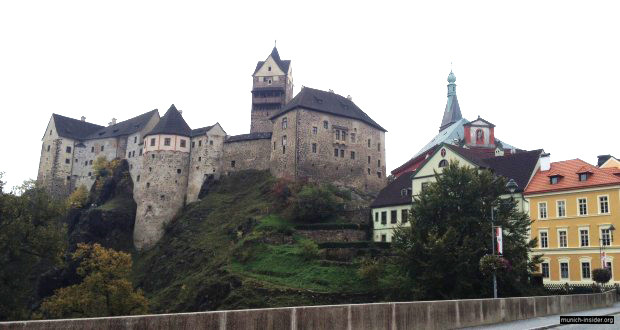 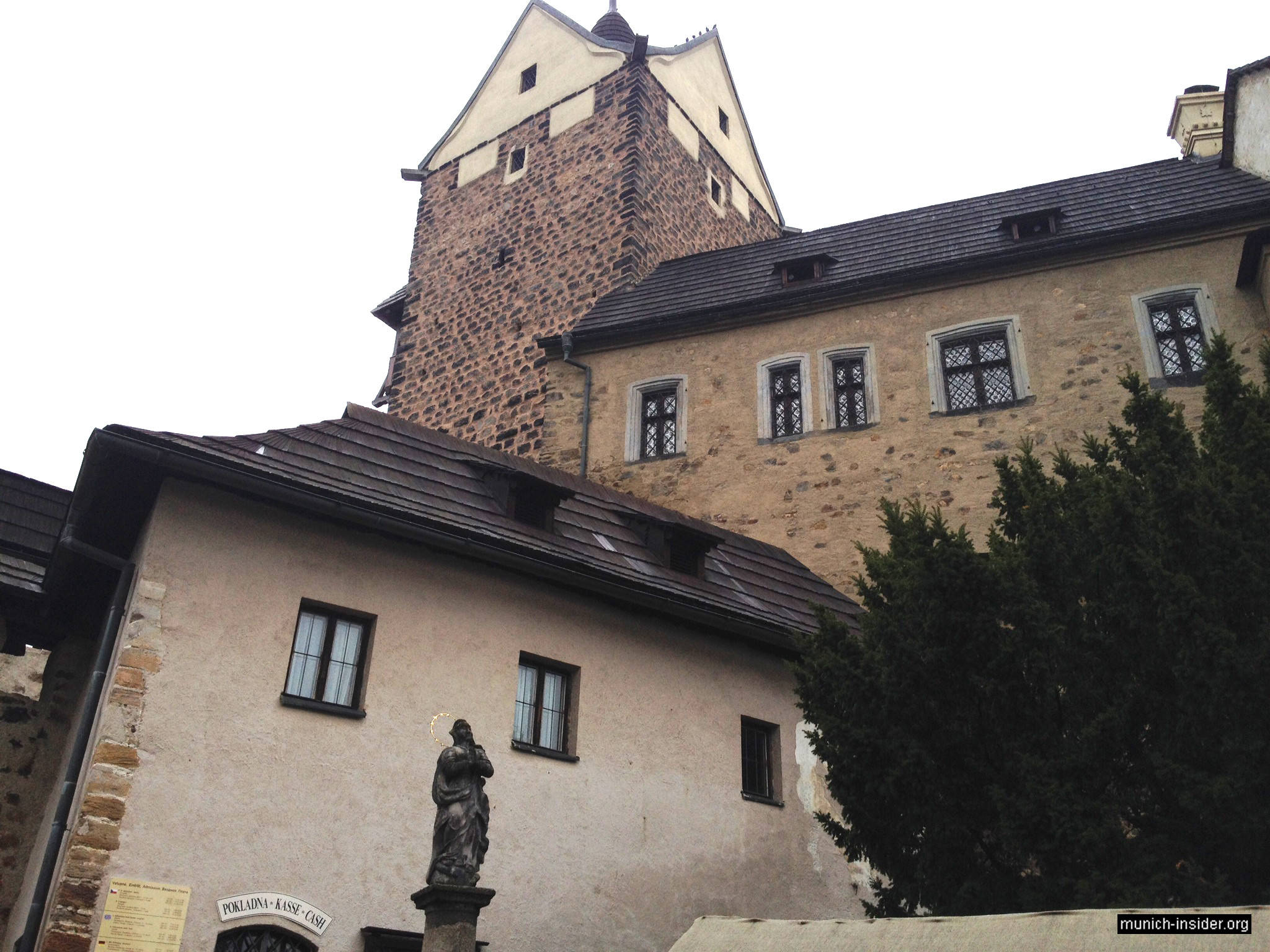 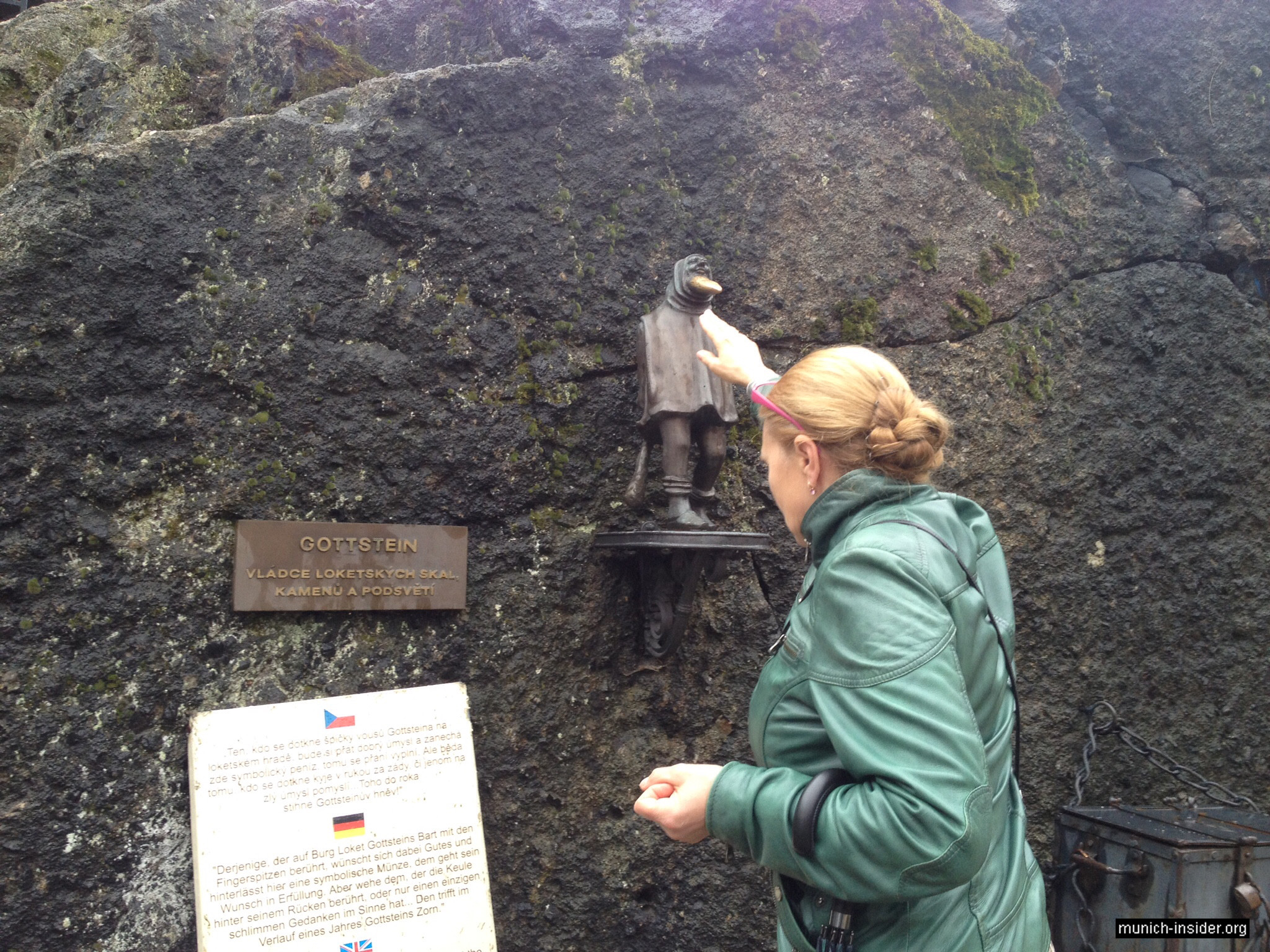 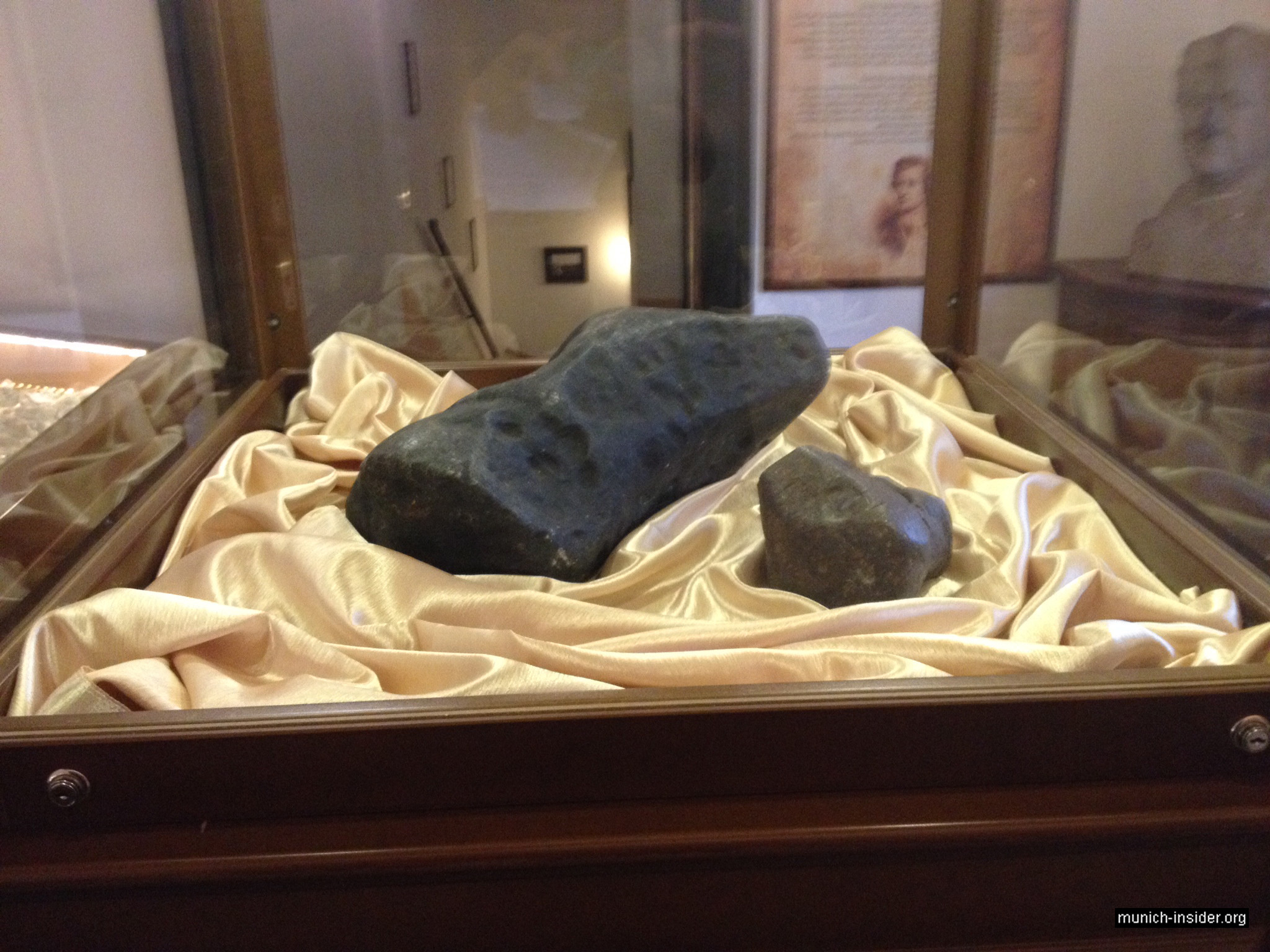 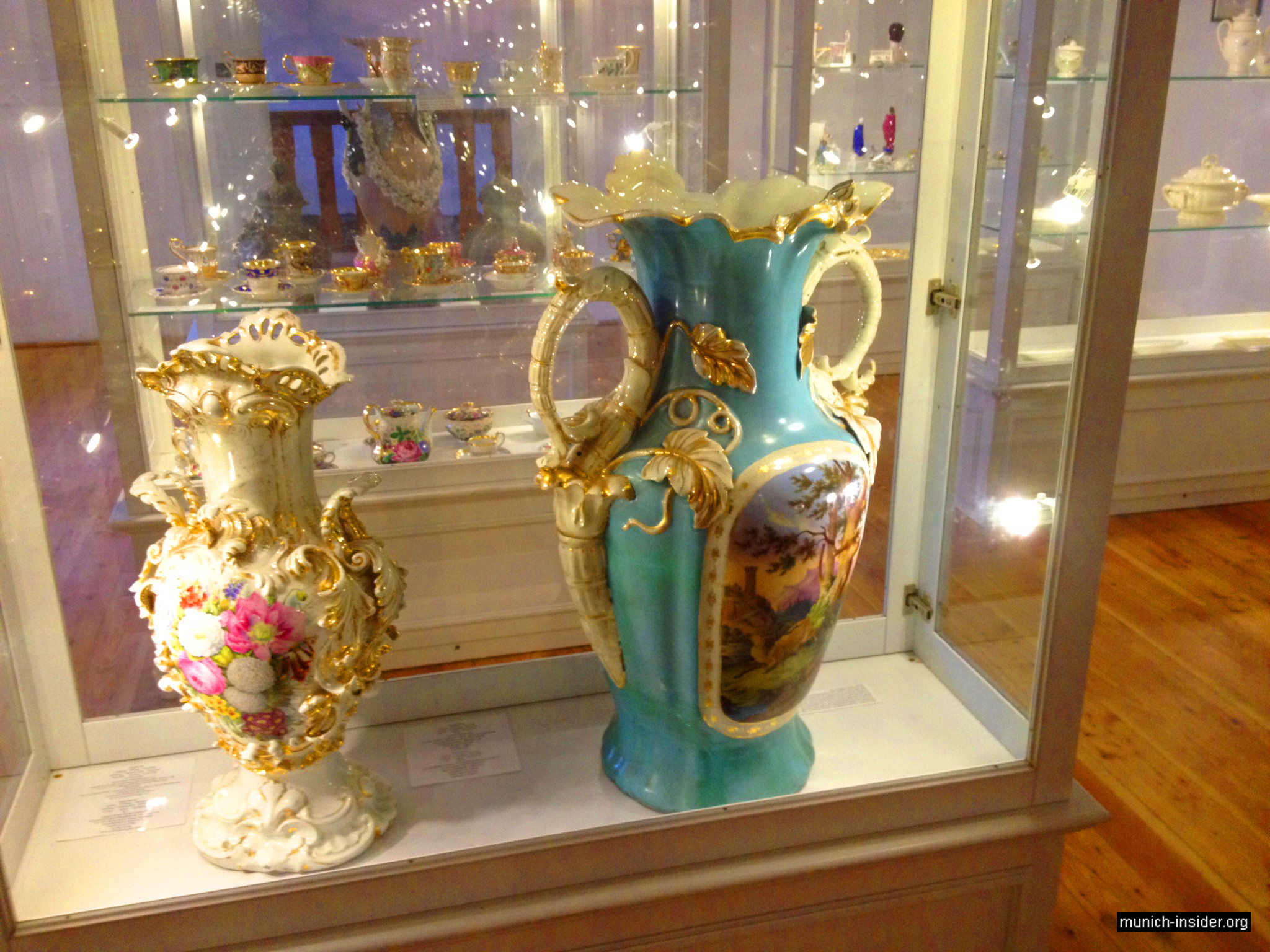 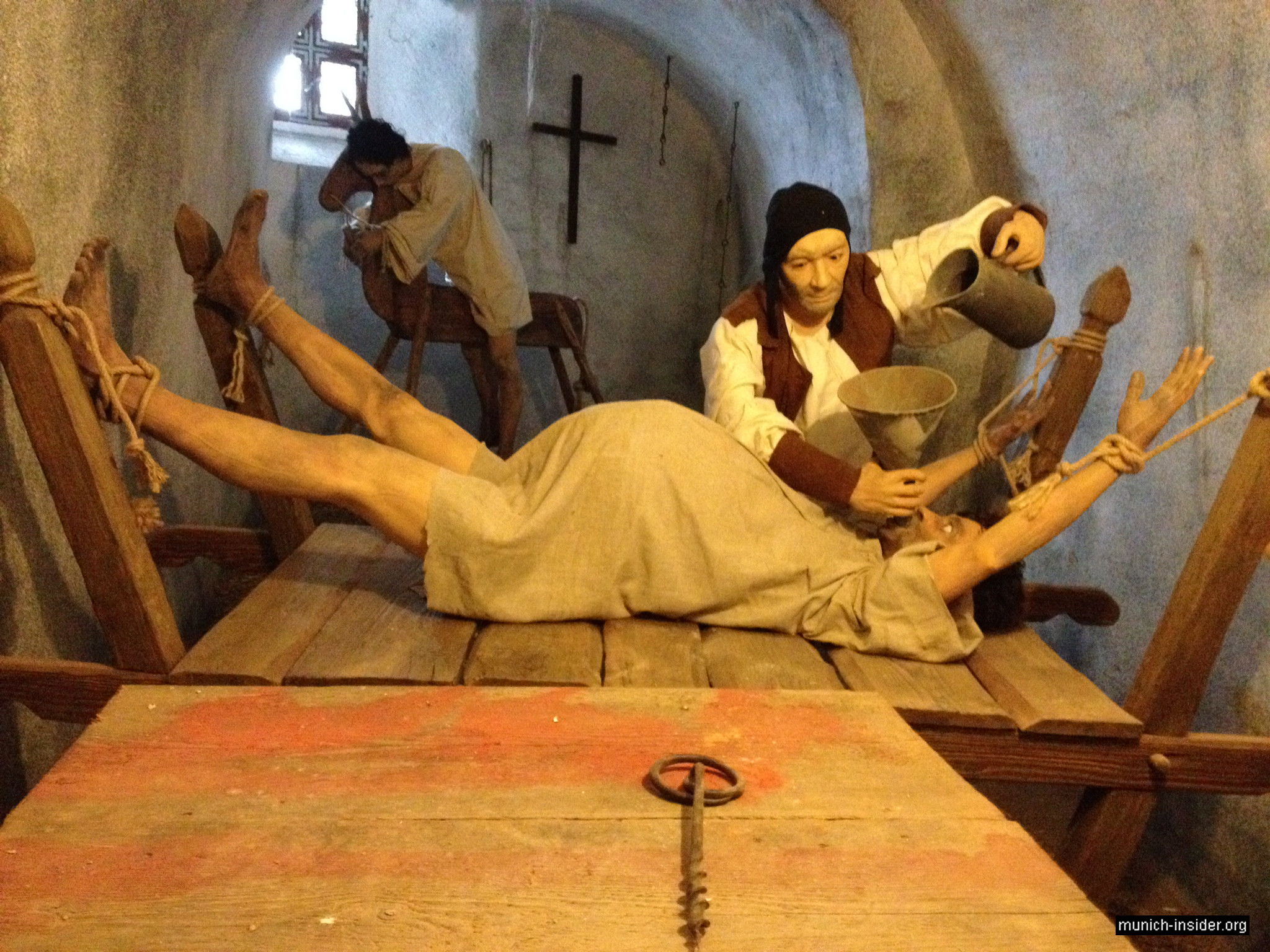 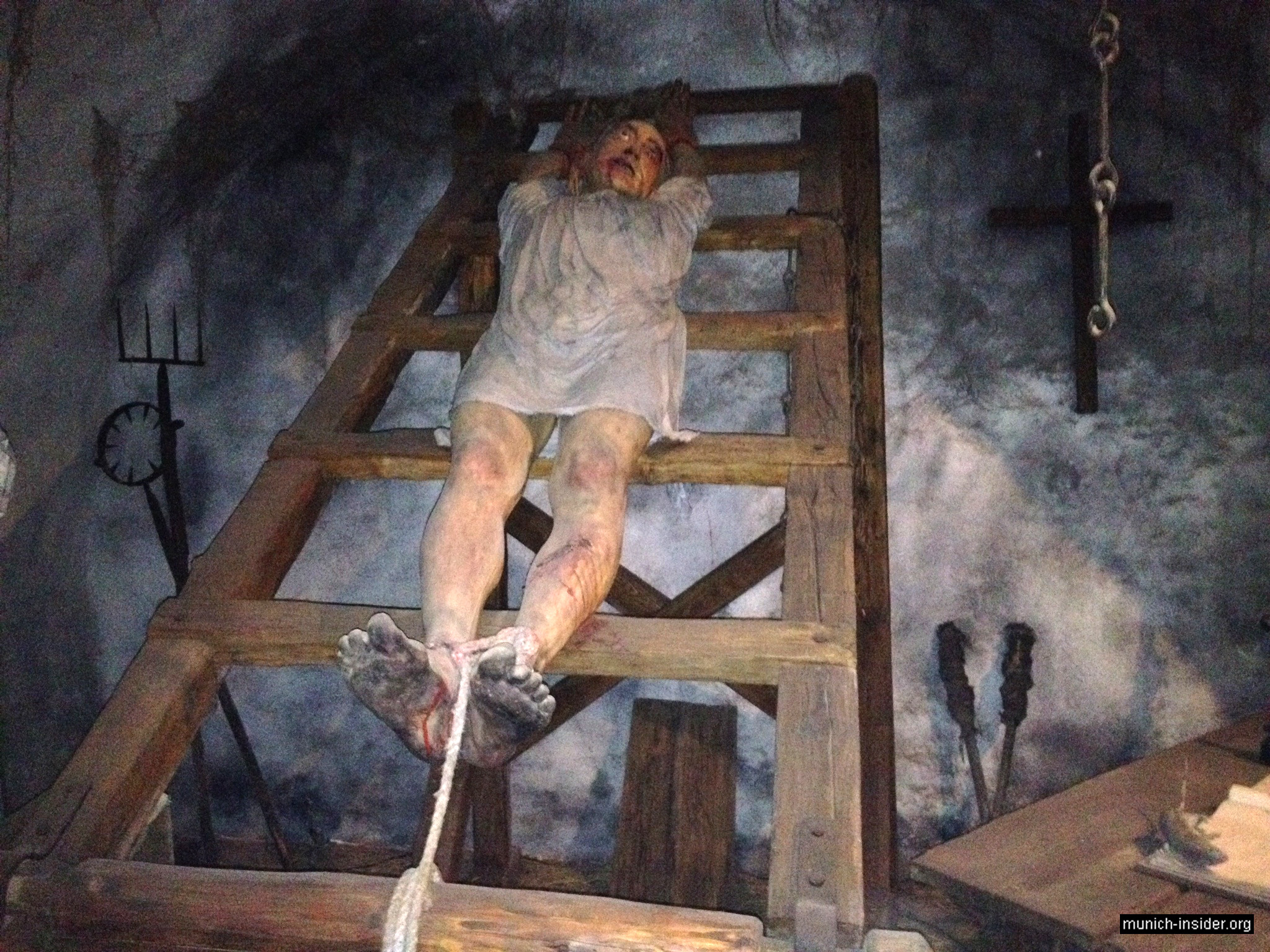 There are two special museums in the castle. On the ground floor, there is a permanent exhibition of porcelain, mostly by the local craftsmen of the 19th century. It may not be on par with some of the museums exhibiting royal porcelains we have seen previously in Europe, but it is worth seeing nevertheless. I especially liked the vases with bas-reliefs. However, a very different museum was the climax of our visit to the Loket Castle. I am talking about the torture chambers. In the past, the enormous dungeons in the castle were used as a jail where prisoners were tortured with all the cruelty and sadism characteristic of the dark ages. The torturers employed various technical devices, which a sophisticated human mind was capable of making. We have seen several torture museums in Europe. Typically, only torture tools and devices are displayed in such museums. In the Loket Castle, on the other hand, there are moving mannequins or wax figures. They represent both prisoners and guards and appear very realistic. The mannequins not only move along with diverse torture mechanisms, but also produce heart-rending moans and agonizing cries. Honestly, I could not stand this recreation of torture and went outside for fresh air. My husband continued through the exhibits alone – there were about two dozen chambers in the basement, as well as two more levels of dungeons deeper underground. In short, this museum is one of a kind, though not for the faint-hearted.