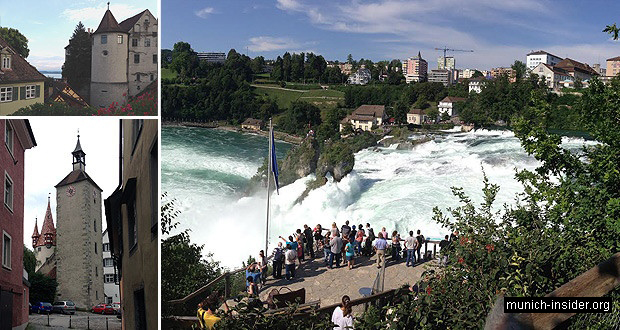 Lake Constance (Bodensee) is one of the most unique natural sites in Central Europe. We used to make recreational trips from Munich to Lindau, the closest resort town on Lake Constance. This time, we decided to drive much farther and visit several attractions. The trip left such a strong impression on us that we even wonder: why would the Germans, Austrians and Swiss want to travel for vacation overseas, when there is such a miracle of nature right here. However, let me describe everything in due order.

The trip took the entire day, at least 12 hours: we left Munich at 9 am and returned almost at night. But it was worth it! The main thing is that we were lucky with the weather; it is not worth going on this tour in bad weather. 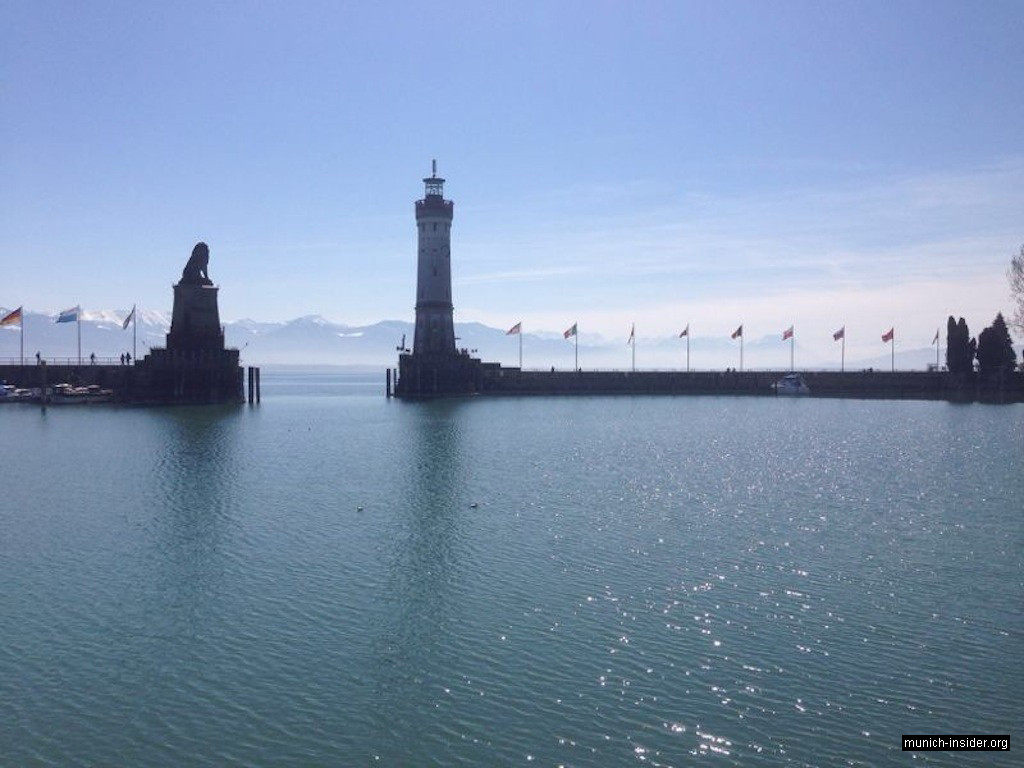 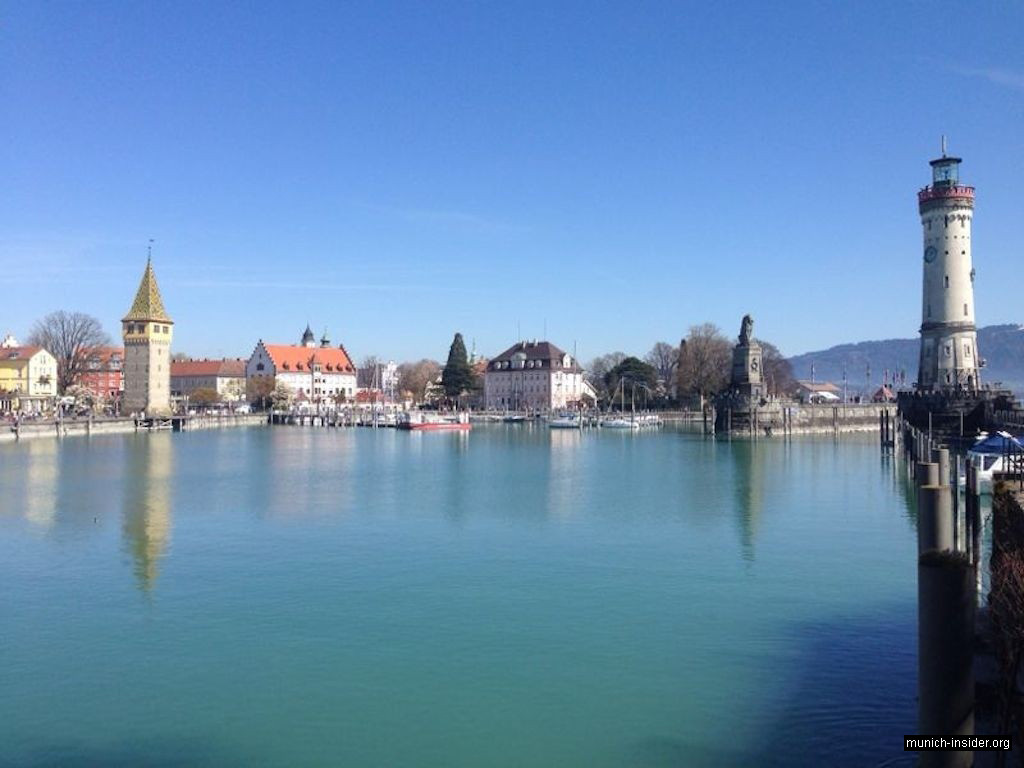 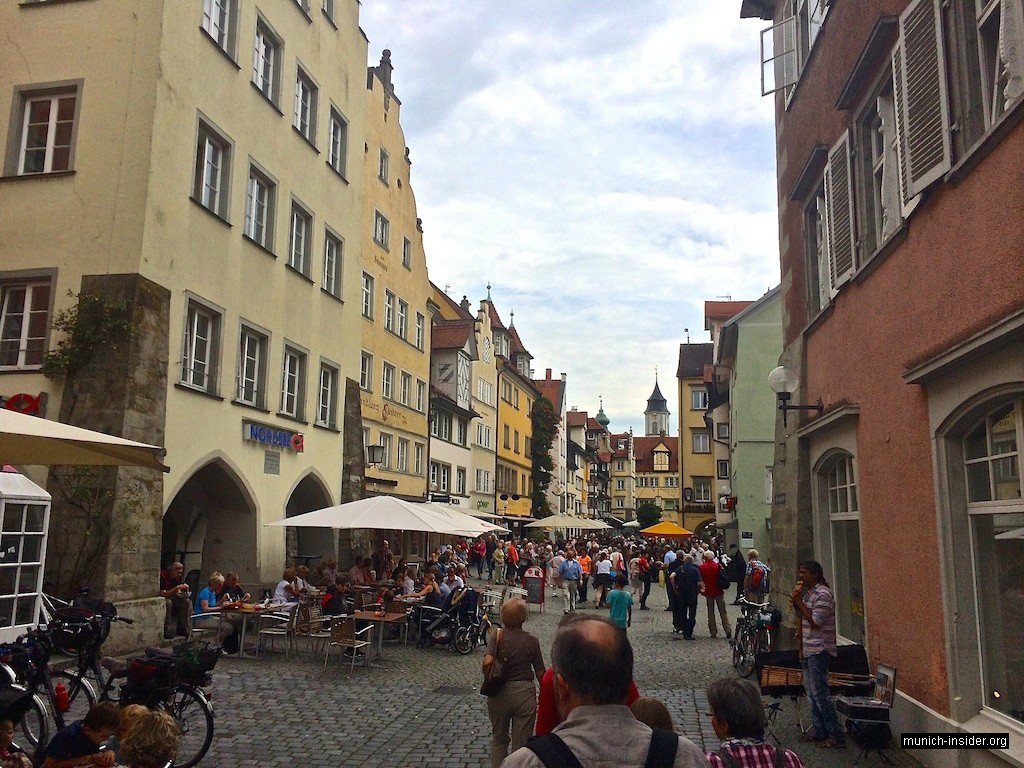 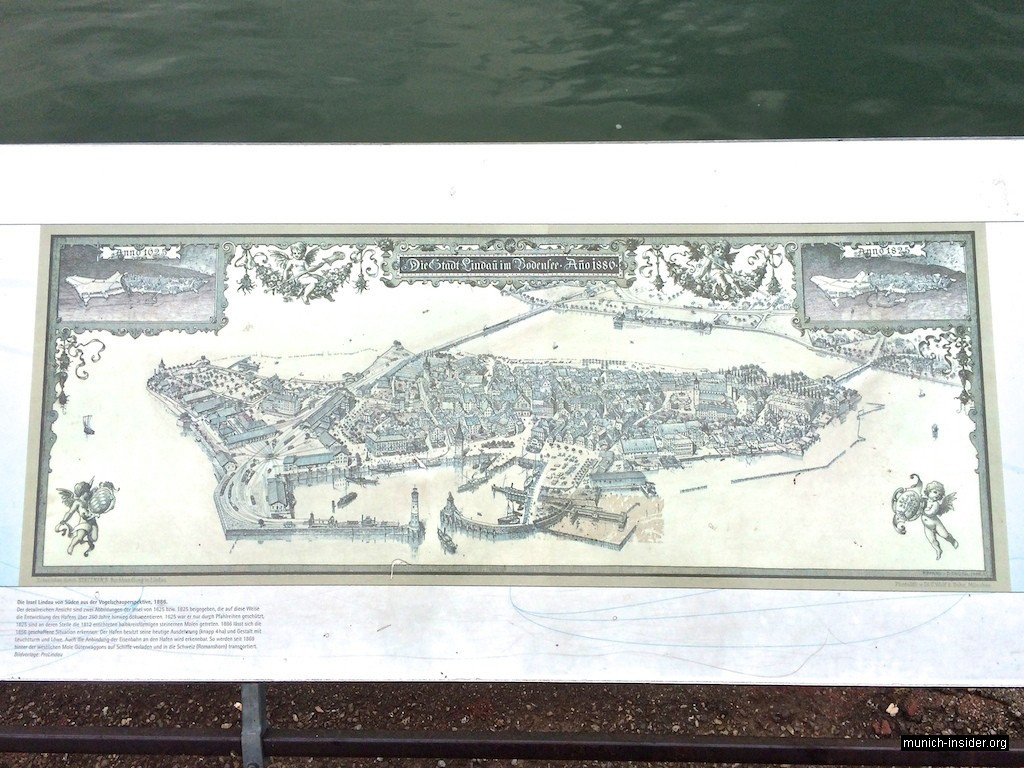 A small region near the eastern end of Lake Constance belongs to the state of Bavaria. The town Lindau is situated in this region. It is about 180 km (112 mi) from Munich. It took us a little more than one and a half hours to drive there from Munich. Most of the town is located on the lake shore, but its most interesting part is on a small island accessible by a bridge. We parked there near the main train station. From the parking we walked along the waterfront to the port. We got to the port in 7 minutes. The environment there somewhat resembles northern Italy: luxury hotels, cafes overlooking the harbor with a lighthouse, the lake on the backdrop and the Alps on the horizon. There were lots of people in the port; many wanted to take a boat cruise. I recommend going on such a cruise if you have time. We did such tours a couple of times before and really liked them. However, we had other plans for this trip. It should be noted that the entire island is a large pedestrian area. We went to the center of the island past the Old Rathaus, colorful old houses, towers, small gardens and cozy cafes. In one of the cafes we stopped for a snack. We sat, relaxed and even wondered for a moment: why drive farther somewhere else when it is so nice here, on this small lovely island. Eventually though we decided not to break our original plan and went back to the parking lot.

The next point of our journey was the Rhine Falls (Rheinfall). It is in the Swiss town of Schaffhausen. One can drive there either along the northern (German) shore or along the southern (Swiss) side of the lake. We chose the German route – through the city of Meersburg, then by ferry to Konstanz and then to the waterfall. It is less than 50 km (30 mi) from Lindau to Meersburg, but it took us nearly an hour to drive there. The road goes through numerous towns and villages with speed limits of 50 and even 30 km/h (~30 and 20 mph). Along the way, we counted 6 or 7 automatic radars with cameras, called Blitz in Germany. So, one has to drive there very carefully, the penalties for speeding are hefty. We passed the town of Friedrichshafen, the native town of Graf (Count) von Zeppelin where he built his legendary airships. It is a small town, but there is an international airport there. It is particularly popular in winter as a gateway to the ski resorts of western Tyrol and eastern Switzerland. We drove around Meersburg and came directly to the ferry at the port. A walk through the town we decided to postpone until the evening. 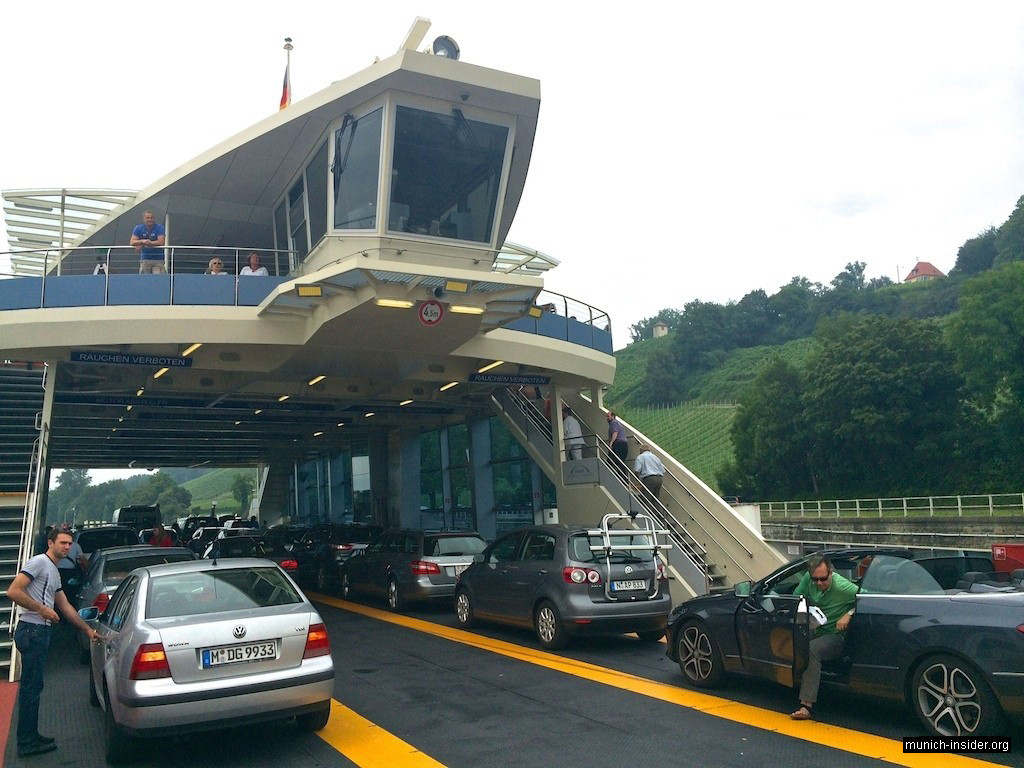 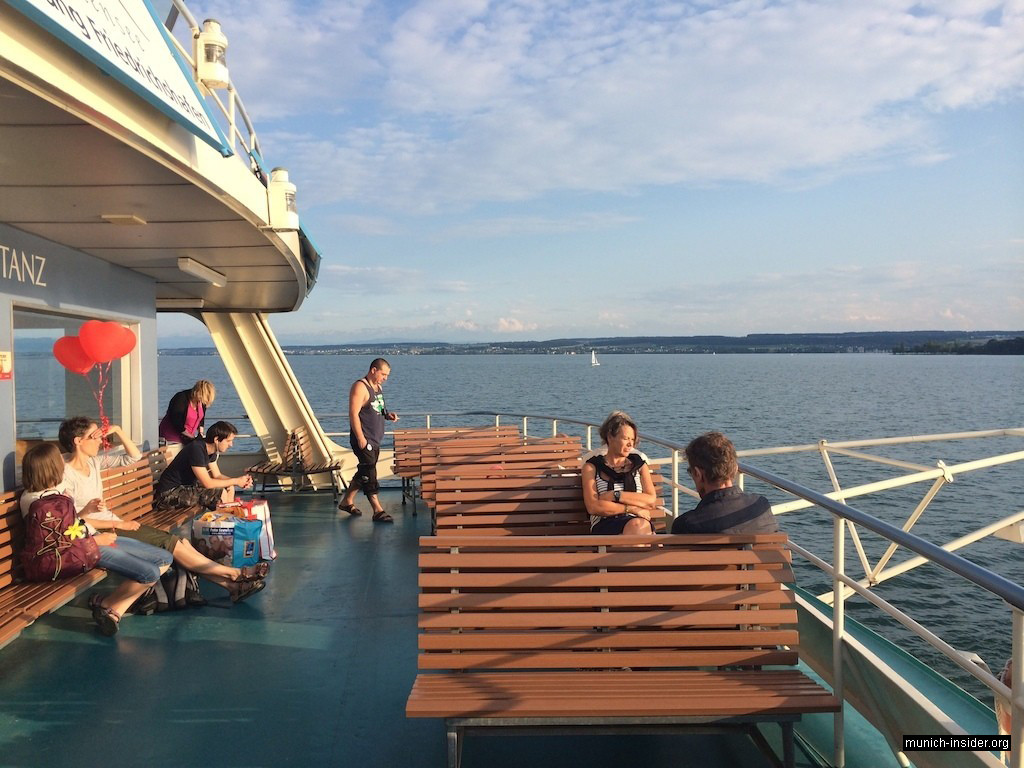 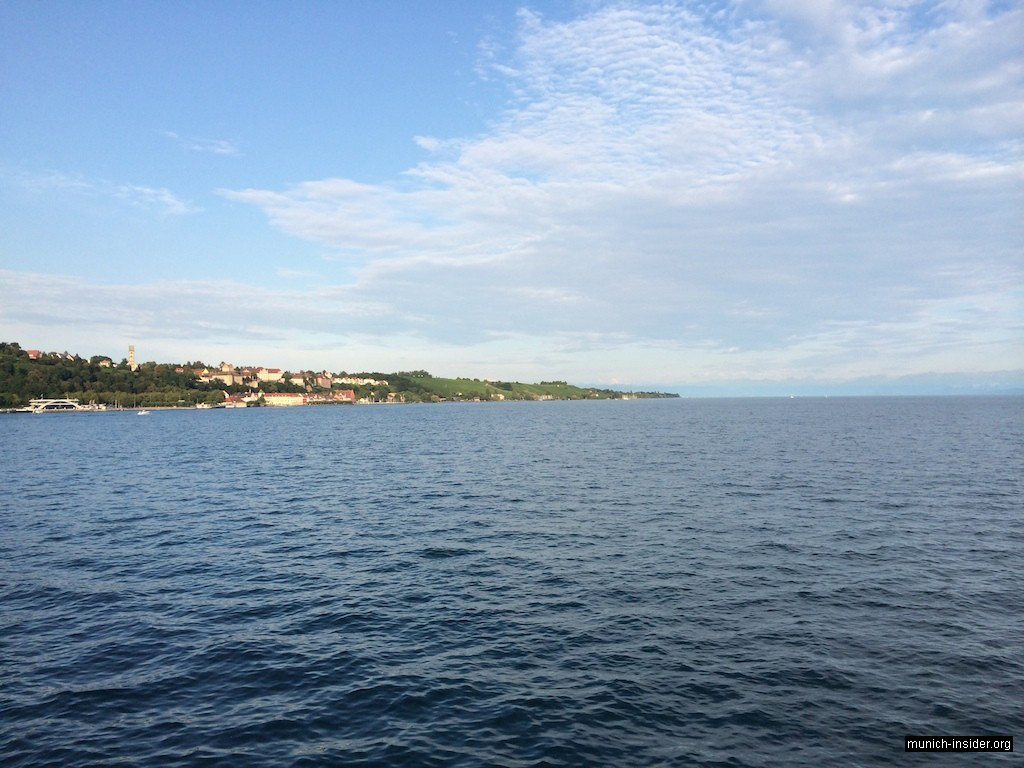 To get to the city of Konstanz on the other side of the lake one has to use the ferry. Ferries run frequently and although there were many cars in line, we waited for loading no longer than ten minutes. The crossing took about twenty minutes and left quite a strong impression on us. The sensation was as if sailing in the sea, the water in the lake was blue and the waves were quite significant. One could feel rocking and rolling of the ship. The views of the surrounding alpine meadows and mountain peaks were just stunning. This short sailing relaxed us to such extent that the road fatigue completely disappeared.

The city of Konstanz is located at the border with Switzerland. It not only has a beautiful name, but is itself very pretty. It may not have some outstanding world-renowned attractions, but all the houses emanate some thoroughness and wealth. We did not stay long in the city, just got a quick snack and moved on. Having crossed the border into Switzerland we drove in the direction to the city of Schaffhausen.

The Rhine Falls (Rheinfall) – the largest waterfall in Europe 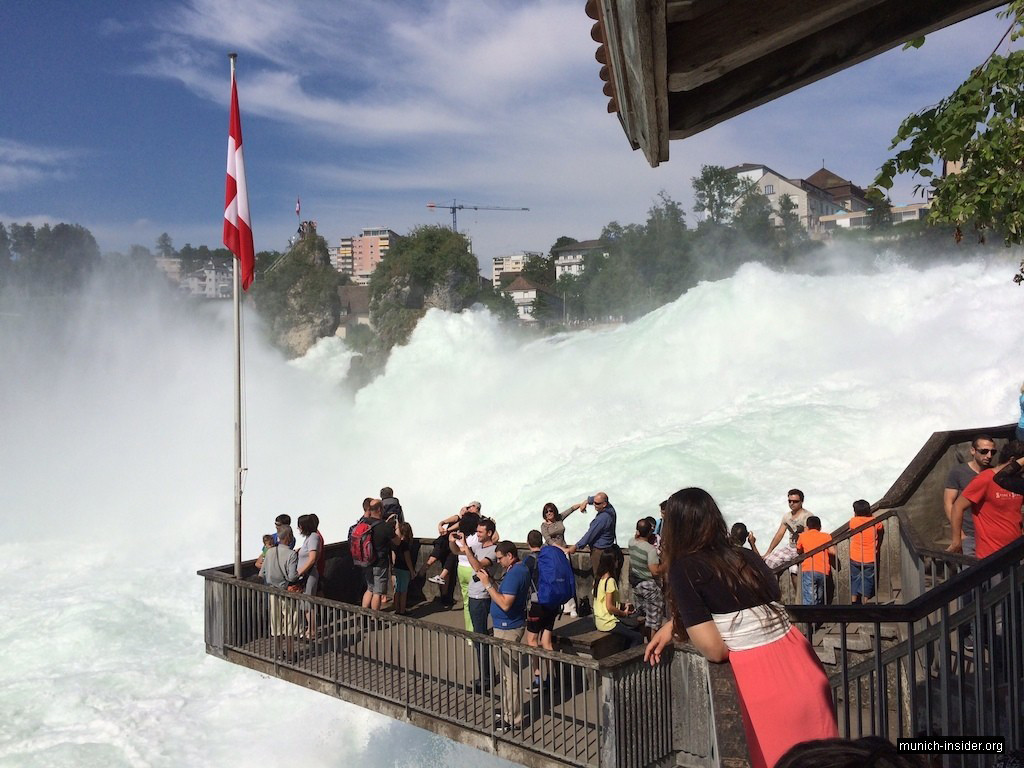 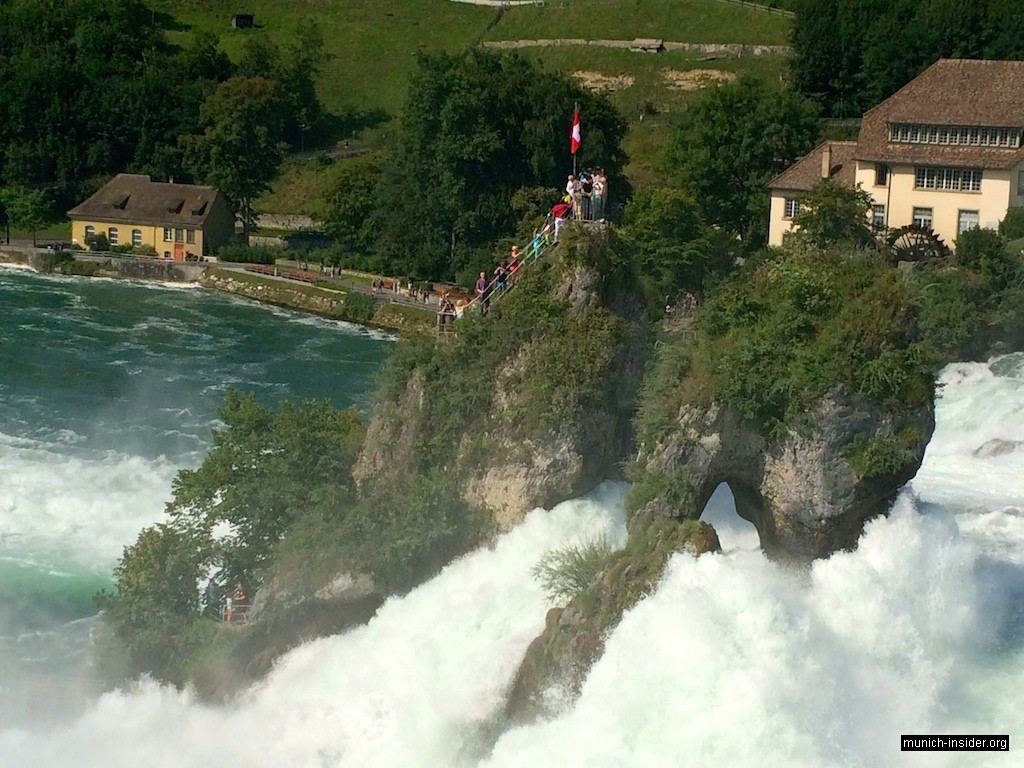 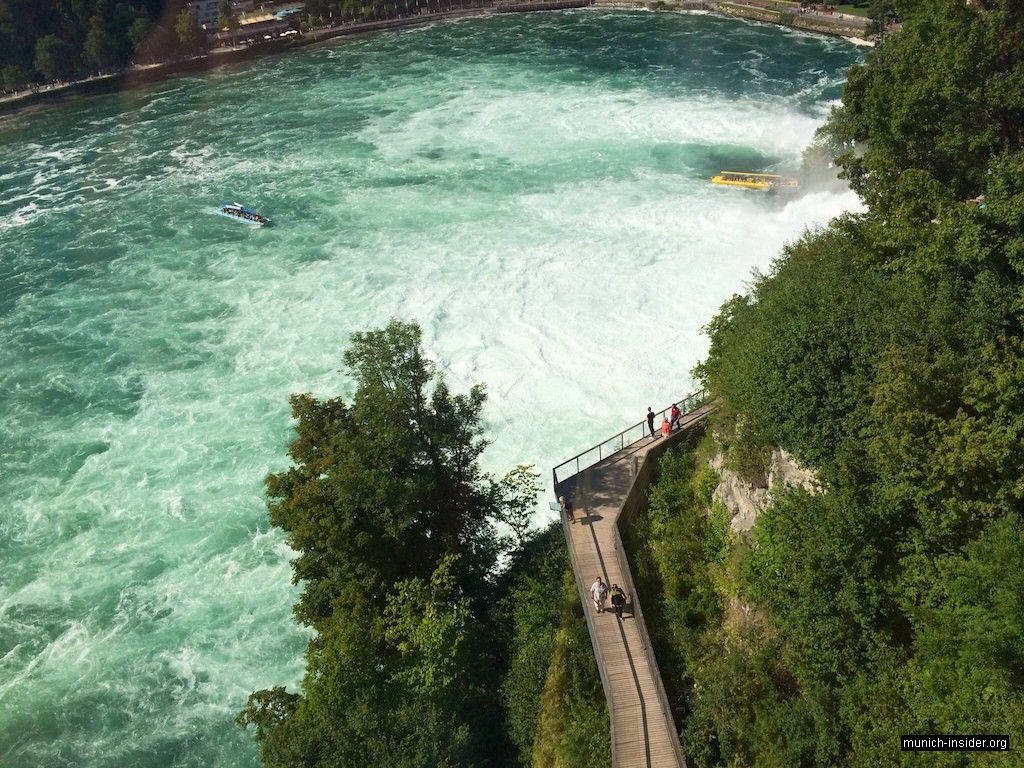 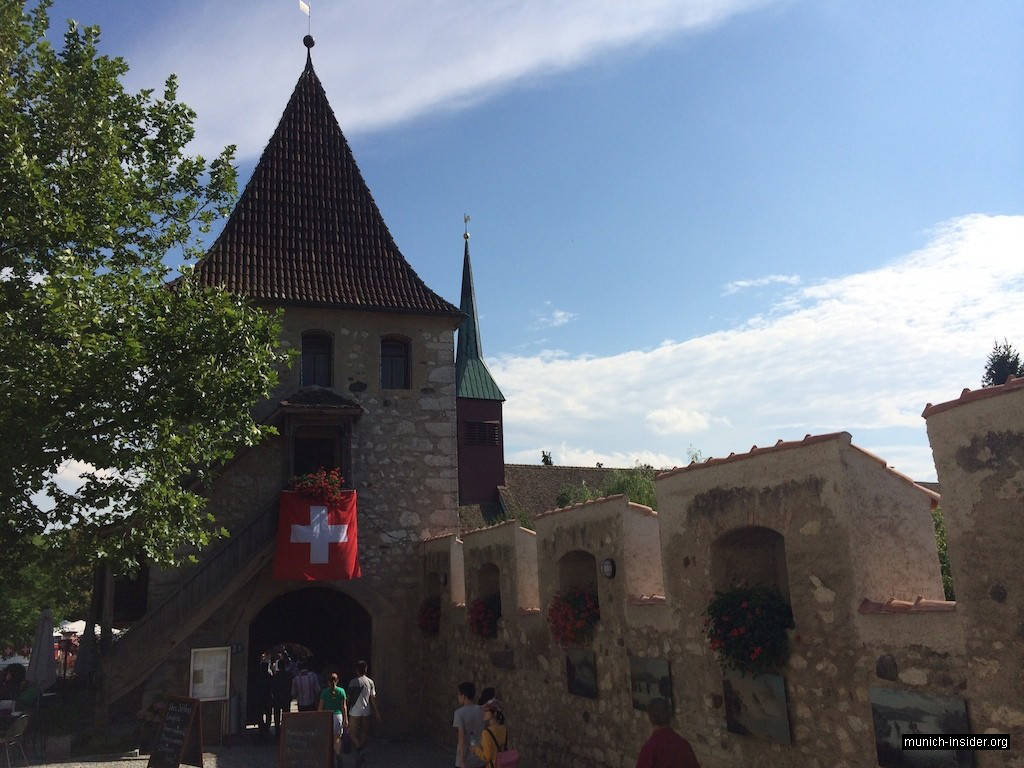 The waterfall is in the bend of the Rhine river, about 20 km (12 mi) from the Lower Lake (Untersee),. We parked at the top, near the Laufen castle. The parking lot there is designed for about 1000 vehicles, so there is no problem to find a free spot. The castle is small and quite cute; it houses a museum of the history of the Falls. We did not visit the museum – what for is it anyway when you can see with your own eyes and enjoy this magnificent natural phenomenon firsthand? We walked across the bridge and down the stairs to the observation deck. The view from there is stunning; I did not expect to see such a powerful water extravaganza in the heart of Europe. Well, the Rhine Falls may not be even close to Niagara in size, but this waterfall is still very impressive. It is not very high, but is rather wide. Tons of water rush with great speed, breaking on the rocks; an unforgettable experience.

Besides the observation deck on the shore, there is another one on a rock right in the water. Tourists can go to this observation deck by boat. Water hit this rock with such force that seems it can wash away everything and everyone. Of course, it is actually safe; everything was envisaged, calculated and is very reliable. Nevertheless, it is a real adrenalin-enhancing attraction.

From the Rhine Falls we drove to Meersburg where we had planned to have dinner. 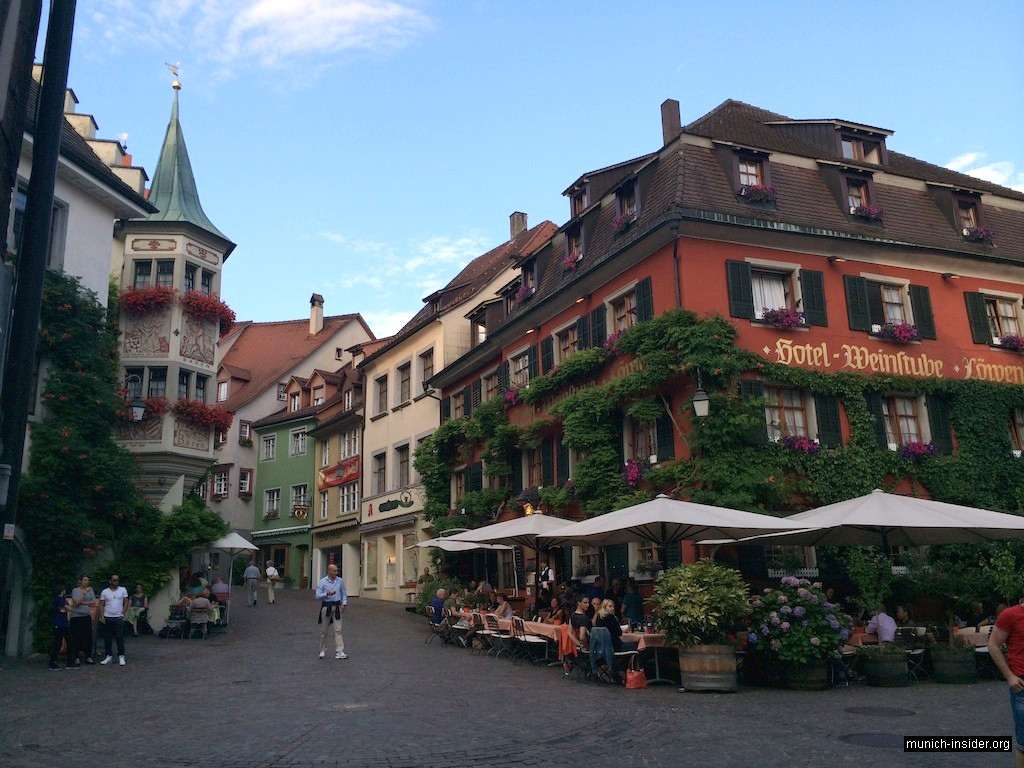 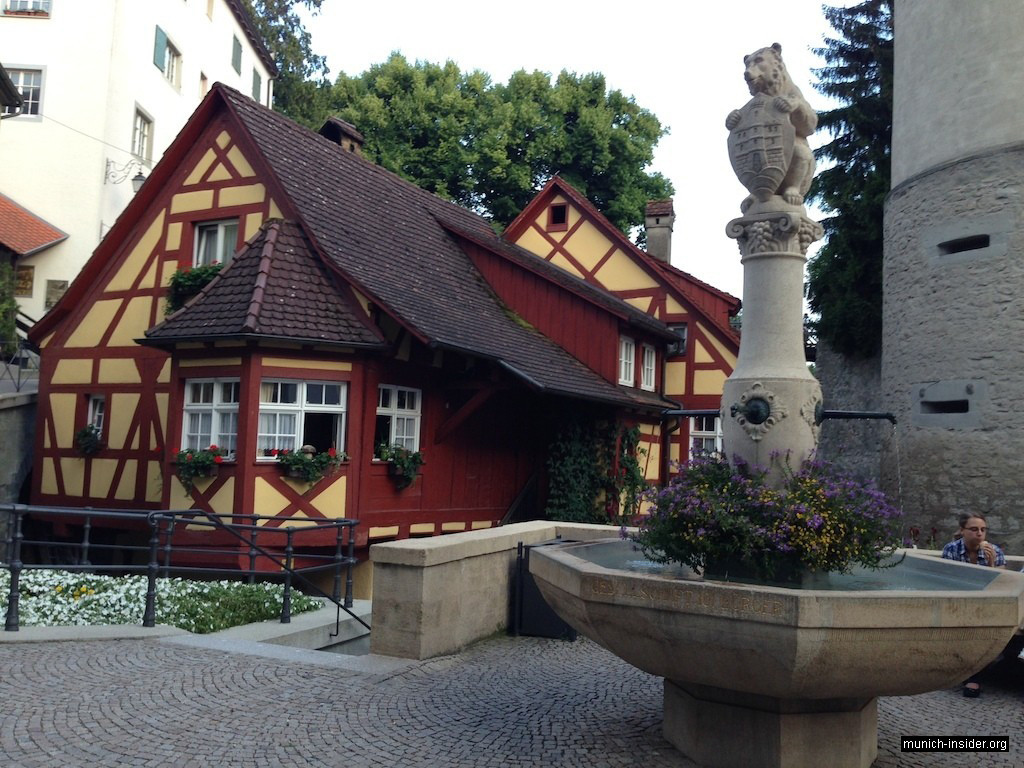 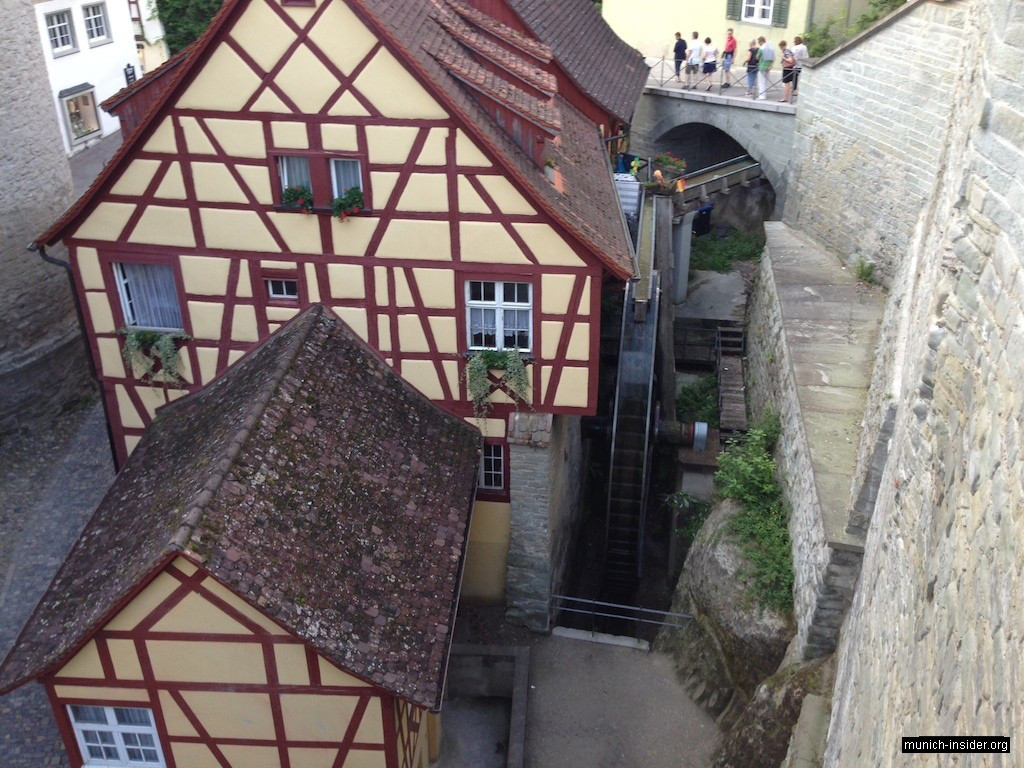 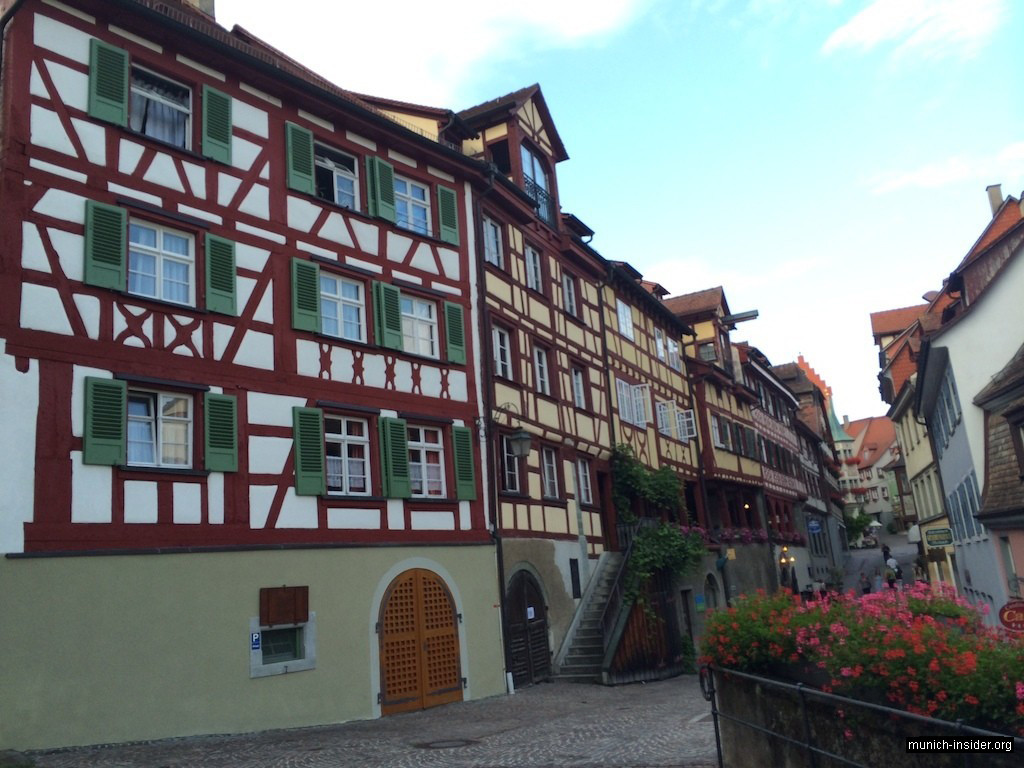 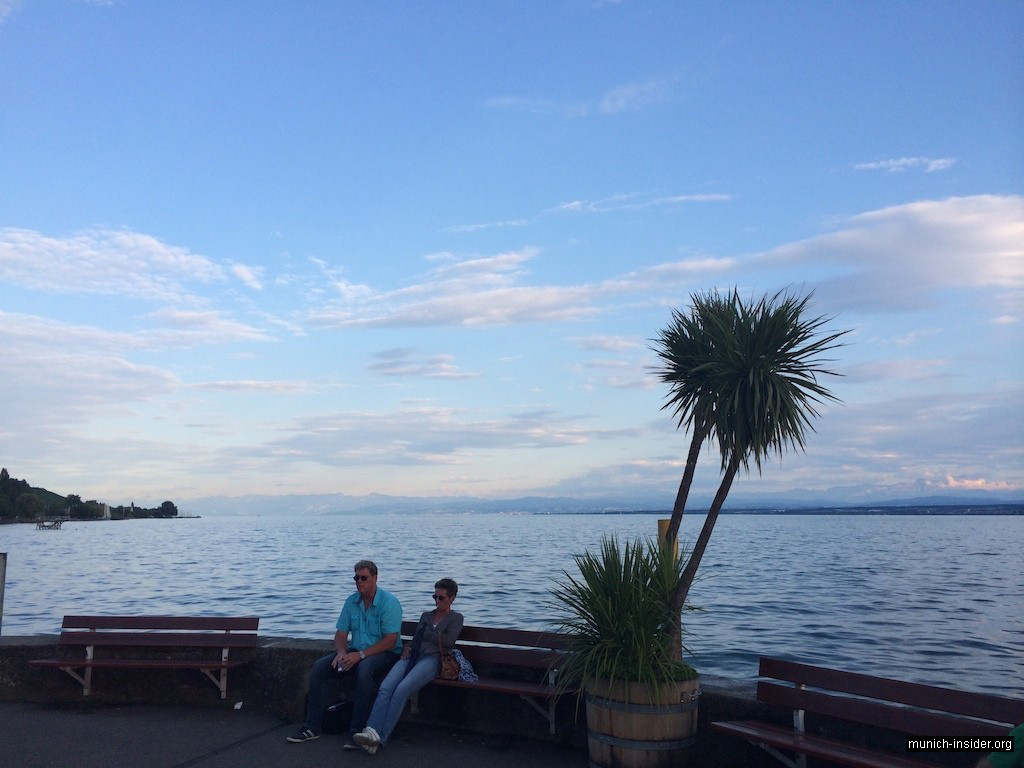 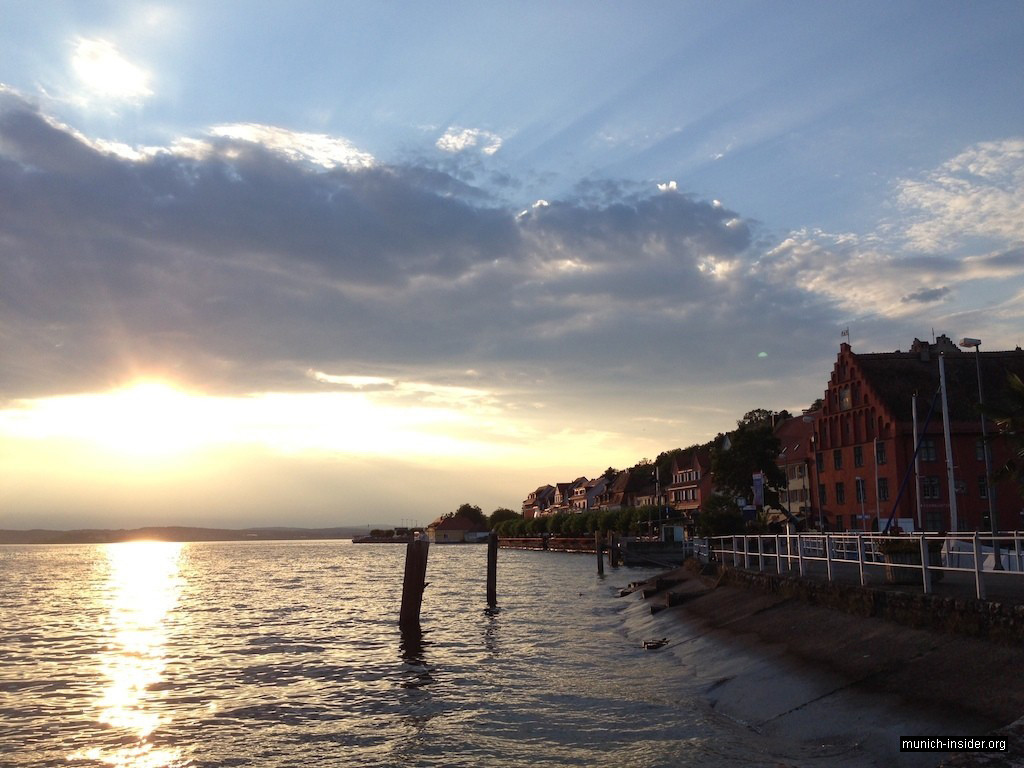 A small antique German town of Meersburg was built according to a typical “medieval design”: the feudal lord’s castle or fortress on the hilltop and houses of the townspeople below it. However, I would not call Meersburg “typical.” There are few and far between German towns that can rival Meersburg in beauty. We parked our car on the hilltop near the castle and then went downhill towards the lake. We walked down the narrow streets lined with old half-timbered houses with red tile roofs. Medieval water mills were attached to the walls of some of the buildings. All the houses are unique in architecture, though mostly built in the same style. The walls are colorfully and beautifully painted. The windows and balconies are decorated with seas of flowers. We were astonished that everything was carefully restored and was in excellent condition. On the other hand, it may not be so surprising for such a wealthy region of the country. It is a real paradise for museum lovers; there are more than a dozen of them in this small town. I would say that the town of Meersburg itself is a museum.

It was already 7:00 pm when we reached the lakeshore. A romantic scenery opened before our eyes: a gorgeous promenade with cafes and restaurants, the picturesque old town climbing up the hill, and the Alps on the other side of the lake beautifully illuminated by the setting sun. Well, I am probably drawn to poetry, but it was indeed magnificent.

Our program for the day was almost completed and after the dinner we drove back to Munich on the same route as in the morning. Of course, our travel schedule was pretty tight, but it was worth it. Here is a piece of advice to those who have not been to these places: you will not regret if you come here.