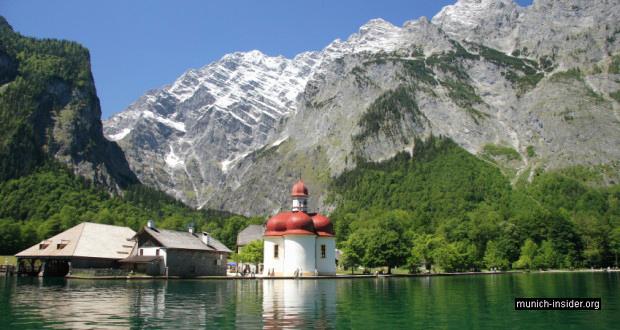 Königssee, the gem of southern Bavaria, is one of the most beautiful mountain lakes in Europe. We started this trip early, at eight o’clock. The destination is rather far from Munich, about 160 km (100 mi), and the A8 autobahn going to Salzburg, Austria is always busy. 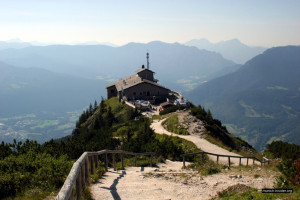 First, we were going to visit the Kehlsteinhaus, Hitler’s retreat in the mountains. It is located in the town of Berchtesgaden on the top of the Kehlstein mountain. The only way to get there is on a tourist bus, private vehicles are not allowed. Buses depart from the Obersalzberg terminal at Salzbergstrasse 45, 83471 Berchtesgaden. You can park your car at the terminal. The last bus departs at 4 pm. A guided tour costs €16 a person. The tours are going from May to October, when there is no or little snow in the mountains.

The bus ride was about 20 minutes. The serpentine road goes uphill very steeply, so the ride was at times really breathtaking. From the bus stop near the top of the mountain, we walked through the tunnel to a hall with a domed ceiling. Then, a rather luxury elevator took us to the summit where the house is situated. It is called different names – the tea house, the cottage retreat, or the Eagle’s Nest. The view on the lake and surrounding mountains from this Eagle’s Nest is just fantastic. For some reason, I wanted to just sit and relax at this astonishing height. In the building itself, there is only a small restaurant and nothing else. One could have had a snack there, but we thought that it should be a better choice in the resort area at the lake. 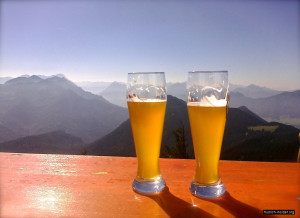 The tour of the Eagles’s Nest took 2 hours and at 12:30 we were back in town. Then we drove to the nearby town of Schönau located at the northern tip of Lake Konigssee. A big parking is right at the entrance to the town (Seestrasse, 83471 Shönau), you cannot miss it. We went for a walk and to find a place for lunch. The selection of cafes and restaurants in Schönau is enormous. We stopped at one of them which appeared less crowded, but literally in five minutes a large and noisy company entered the eatery. Nevertheless, the service was good and the food was very tasty, or so it seemed to us, after the long road and tour. 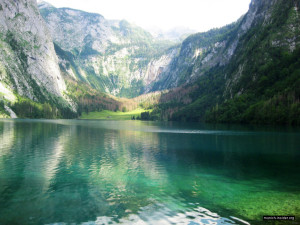 There are two possibilities to enjoy the lake. First, one can get on a boat cruise. There are different cruises, from one and a half to three hours duration. Tickets cost about €14-17 and boats depart every 15-20 minutes. Second, you can rent a rowboat and admire the scenery at your leisure. The price is about €7-10 an hour. We chose a cruise because we were already rather tired and were not inclined to row a few hours. The first leg of our cruise was about 30 minutes sailing to the church of St. Bartholomew (St. Bartholomä). Along the way, the captain demonstrated unique sevenfold echo produced by the surrounding mountains only at a certain location. He sounded the horn, and we heard the reflected sound seven times. According to one legend it is the drowned in the lake who produce the echo. The church of St. Bartholomew is rather small, but very beautiful on the backdrop of the green slop and steep mountains. There is a restaurant next to it where you can enjoy fresh trout from lake Koenigssee and Hofbräu beer from one of the most famous breweries.

You do not have to rush back with the same ship. As I have mentioned before, they sail frequently. You can go on the boat going to the southernmost tip of the lake, the stop is called Salet (another 30 minutes sailing). From there you can hike about 15 minutes to a small lake called Obersee. It is very close to the Austrian border, and you can see high Alpine peaks and a waterfall of a pretty decent height. We followed the example of others and hiked around, enjoying nature and the mountain scenery.

On return to the town of Schönau we spent another hour browsing through the souvenirs shops. There were crowds of tourists parading along the main promenade, yet everyone was calm and relaxed and seemed in tune with the cozy Bavarian houses wreathed with flowers. The mountains and the lake under the setting sun looked so beautiful. Real paradise! We even thought about staying there for the evening and spending the night in a hotel. However, we had other plans for the next day. So, around 6 pm we were on our way back to Munich.