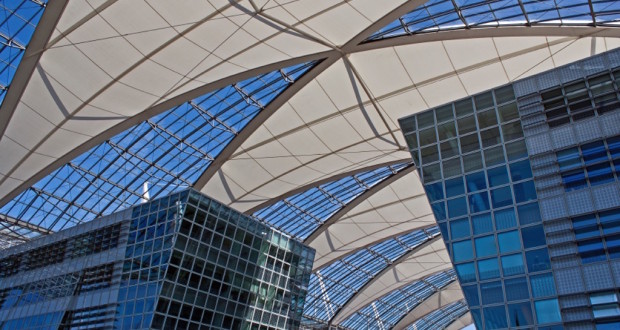 Munich Airport is one of the largest in Europe by passenger traffic. In Germany, it is second only to the Frankfurt Airport. The airport in Munich is relatively new, it was built in the 90s. There are two terminals; Terminal 2 is used primarily by Lufthansa and its partner airlines (Star Alliance members), while Terminal 1 is used by all other airlines. Between the two symmetrically arranged terminals, there is a huge shopping mall – MAC (München Airport Center). There is everything there that passengers and other guests may need – shops, restaurants, medical facilities, and even sports facilities. The Kempinski Airport München luxury hotel, is also located in the mall. Various German TV talk shows are often taped or broadcast live from the hotel’s conference room.

Getting from the airport to the city

The airport is located about 30 km from Munich’s downtown. There are four possibilities to get to the city: 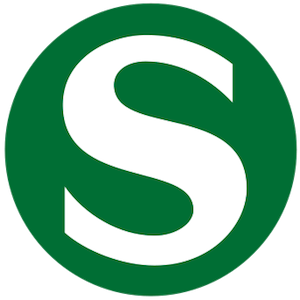 Logo of the S-Bahn in Germany

S-Banh is the most reliable way to get to the city since it is independent from the autobahn traffic. However, it may not be very comfortable if you have a lot of luggage. The departure station is located in Terminal 1 at the MAC; follow the “S” signs as the one shown here. The Munich Airport station is the last on the two lines, S1 and S8. Both lines go to Munich; they have different routes to the city, but merge in the inner city. Therefore, you can use either of the two lines if your destination is in the downtown or surrounding areas.

Trains run with a 20-minute interval on both lines, so you will not have to wait longer than 10 minutes for a train. It takes about 45 minutes to get to the downtown.  The Airport-City-Day-Ticket is valid for the entire Munich transit network (S-Bahn, U-Bahn, busses and trams) for the whole day (in fact, until 6 am the next morning).

Taxi to the city will set you back about ~ €60. If there are no traffic jams, you will be at your destination in the city within half an hour. One benefit of a taxi ride may be the speed on the autobahn – you will realize right away that you are already in Germany.

If one needs a car right away, it can be rented at the airport. It will cost about 20 percent more than renting a car in the city due to the airport surcharge. All major car rental companies have their branches at the airport.

An alternative to S-Bahn is Lufthansa bus. The buses run with an interval of 20 minutes; a ticket costs ~ €11.00. The bus stop is at Terminal 1, exit “Ankunft A”. The time to get to the city is comparable with S-Bahn if there are no traffic jams on the autobahn (this is a matter of chance, of course).

Non-EU citizens can get a VAT (value-added tax) refund on the purchases made in Germany or other EU countries. First, you need to check in for your flight, online or at the check-in counter in the airport. After that, before going through the passport control, you need to go to the customs with your luggage. Show the Tax Free forms and receipts to the customs officer, they must stamp them. You may be asked to show the goods you are claiming the VAT refund on, so your purchases should be with you in your luggage. Only after that you can drop off the luggage for your flight. Finally, proceed with the stamped papers to the Global Blue company office; a cashier there will give you the refund in cash. The customs and refund offices are located in Terminal 1, Module B, level 4 (open from 6:00 a.m. to 10:00 p.m.) and Terminal 2, level 4 (open from 7:00 a.m. to 8:00 p.m.). In after hours, when the refund office is closed, you can proceed as follows: Put all forms and receipts in one envelope along with a sheet of paper with you name as well as credit card name, number and expiration date. Drop the envelope in the Global Blue mailbox near their office. Money will be deposited to your credit card in a few months.