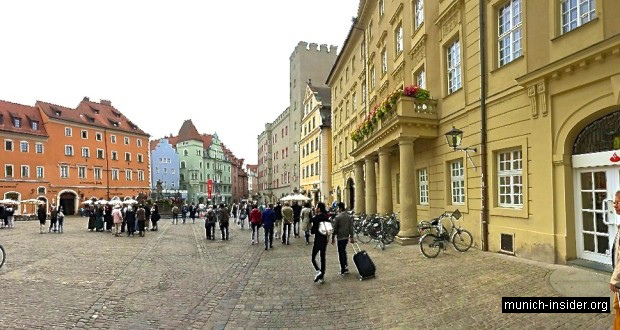 There was once a powerful empire in Europe, which had a rather strange and long name – the Holy Roman Empire of the German Nation. It existed for a long time: from the late 10th to the early 19th century. Its territory included at different times the territory of modern Germany, Switzerland, Austria, Czech Republic, Italy, Netherlands and France. The capitals of this empire were Rome, Vienna, Prague and … Regensburg. Yes, this small Bavarian city was once one of the centers of imperial life, it was the seat of the Reichstag (Senate), which had the power to elect the emperor. Long before that, Regensburg, along with Trier, was the main outpost of the ancient Roman civilization on the German soil. All this history along with the city’s picturesque setting on the banks of the Danube makes Regensburg a magnet for tourists. Trips to Regensburg are interesting not only for history buffs, but also for those looking for a relaxing retreat.

The road from Munich to Regensburg took just over an hour. It was a weekend, there were no traffic jams in the city and we had no problems finding parking in the downtown on Arnulfplatz. Regensburg is a small city, but with a glorious history. There is an abundance of interesting sights here. The half-day trip was not nearly enough to see everything, so we decided to see only the most iconic landmarks. Our plan for the walk through the Old Town was the following: Altes Rathaus (Old Town Hall), the Stone Bridge over the Danube River, St. Peter’s Cathedral, the Church of the Holy Trinity and the Thurn-and-Taxis Palace. 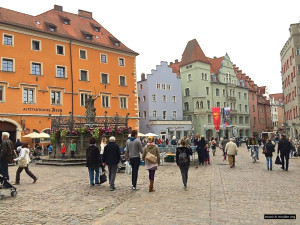 From the parking lot, we went along the pedestrian street Ludwigsstrasse straight to the historic Old Town district. Along the way, we passed through the Haidplatz square, where jousting tournaments were held in the Middle Ages. Our attention was drawn to a large gray façade with a turret with a top with crenellations. It turned out that it was a very old castle, Goldenes Kreuz (Golden Cross). They say that its architecture is very similar to Scottish castles. 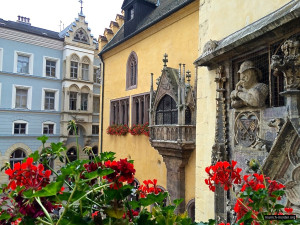 We walked on and soon found themselves on the Rathaus Square. Interestingly, almost all old squares in Regensburg have triangular shapes, so literally they are no “squares”. The Altes (Old) Rathaus building is famous for the fact that it was the seat of the Imperial Reichstag, which consisted of seven rulers of the empire. They used to elect Emperor of the Holy Roman Empire of the German Nation. The declaration on the dissolution of the Empire was adopted in 1806, in this very building. Actually, it is not a single building, but the whole complex of connected Gothic structures. You can almost feel the breath of history here. The most interesting part of the Rathaus is inside – the Reichstag museum. In rainy weather one can spend an hour or more there. However, it was sunny when we were visiting, so, we quickly continued our stroll through Regensburg.

Stone Bridge over the Danube River 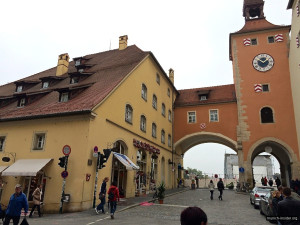 Next, we headed to the Danube. It is just a couple of minutes’ walk through the Torturm, an old city gate with a clock tower. This medieval structure is very well preserved; of course, it has been renovated, plastered with pink stucco and looks pretty. Immediately after passing through the Torturm gate, we were at the famous Stone Bridge (Steinerne Brücke) over the Danube. It is the oldest bridge in Regensburg, it was constructed in the 12th century. They say that it served as a prototype for the famous Charles Bridge in Prague. Indeed, both bridges have somewhat similar appearance. Well, the Prague’s bridge which a real magnet for tourists may be more impressive, but it is almost three centuries younger than the bridge in Regensburg. For some time, after World War II a tram track was on the bridge, but now the bridge is only for pedestrians. It is indeed a unique medieval architectural structure. The views from the bridge over the Danube and its banks are amazing. We crossed the bridge to the other side of the river and then went back to the Old City.

St. Peter’s Cathedral and Church of the Holy Trinity 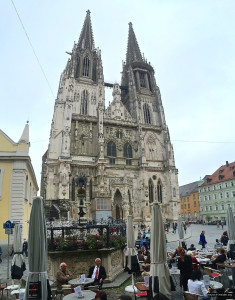 [/su_lightbox]We came to the central square, Domplatz. The main Regensburg’s attraction, St.Peter’s Cathedral (Dom St.Peter) is on this square. The two Gothic spires of the cathedral are towering over the city, which is rather typical for the main church in a German city or town. Regensburg’s Dom somewhat resembles Cologne Cathedral; it may not be as high and impressive, but is also remarkable, both outside and inside. We especially liked the beautiful stained glass windows. After admiring the cathedral we went into a café, right here on the square. It was nice just to sit, relax and have a little rest. We had a typical German lunch – schnitzel with potatoes and beer.

After lunch, with renewed energy we continued our walk through the Old Town and headed to the church of the Holy Trinity (Dreieinigkeitskirche <try to pronounce this word in one breath>). Our goal was to climb on its bell tower and see the city from above. Even though the observation deck of the tower is not so high, the views of the city, and particularly the Danube, are really great. We took quite a few beautiful pictures there.

We headed towards the final point of our walk through Regensburg – the Thurn-and-Taxis palace (Schloss Thurn-Und-Taxis). The palace is inhabited today and is interesting for its history. It is the residence of the German noble family of Thurn und Taxis; nowadays one of its descendants, billionaire Albert von Thurn und Taxis lives in the palace. The Princely House of Thurn and Taxis is famous for its contribution to the development of the European postal service. A couple of centuries ago, rich Princes bought an old Abbey of St.Emmeram (Kloster St.Emmeram) in Regensburg and rebuilt it into their ancestral castle. The building has a very beautiful Baroque façade; the lawns and plants in front of the palace are just marvelous. There is a large park around the palace. We walked in the park and admired the palace ensemble. In general, we just had a rest and received an additional supply of energy for the road back home.