Salzburg Attractions – a Day Trip from Munich to Mozart’s Birthplace 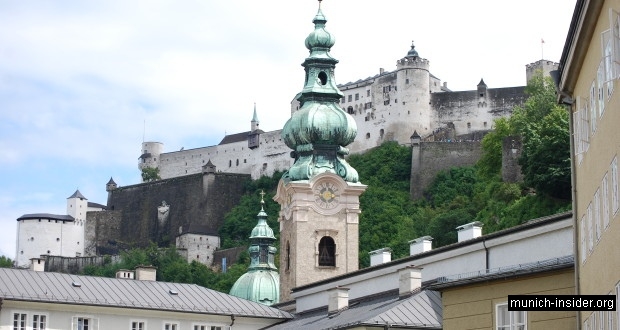 We went to Salzburg by train. It is cheaper than driving; moreover, the autobahn to Salzburg is almost always extremely busy and traffic jams are frequent. The train journey was very convenient and comfortable. We bought the Bayern Ticket in the vending machine at the Munich train station. It cost €31 for three of us. The ticket can be used on local and regional trains, and is valid for the whole day in Bavaria and the Austrian border cities, including Salzburg. Local trains (designated M) to Salzburg run every hour. We left Munich at 8:55 am and arrived to our destination at 10:45 am. The city of Salzburg is relatively small and the main train station is located near the city center. The central part of Salzburg is divided by the Salzach River into the Old Town and New Town.

This city district is called Neustadt as opposed to Altstadt, even though it is not actually a modern urban area. From the train station, we first walked through the New Town. Ten minutes later we admired the famous city park, Mirabellgarten. Eye-pleasing lawns and sculptures, everything is very well maintained – the park sets the tone for the entire trip. There is a small neat palace in the garden. We found the park corner with famous figures of dwarfs. Some call them freaks, but we found them ugly and cute at the same time. These sculptures are unusual because they are very small, less than a meter tall. Again, some say they make fun of human defects and sins while in fact they simply represent different occupations and nationalities. Well, maybe they do look like caricatures, but it was not a time of political correctness when they were created. 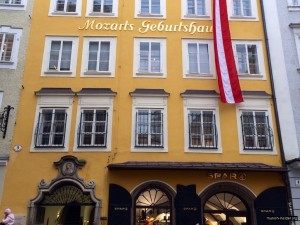 After the park, we went to the Makartplatz square where the House of Mozart museum is located. He lived here with his parents in his youth. The house is a rather standard for that time two-storey building. I would say that it has a rather modest appearance for Salzburg, which is the city of Baroque architecture. In my opinion, the composer’s natal house (Getreidegasse 9) in the Old Town looks more interesting from outside. We visited the museum in the Mozart natal house later, after we crossed the river. They say that the Mozarts moved to the new house on Makartplatz to have more living space. Even in the new place they occupied only the second floor and not the whole house. And this despite the fact that the head of the family, father of Amadeus, also a composer, was well-known in the musical circles of Europe. Probably, the reason was that both apartments were in the city center, and Salzburg at that time was a popular and expensive city. 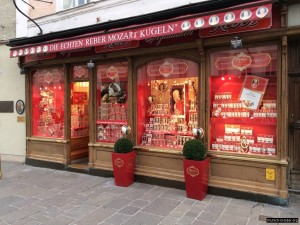 We liked the Old Town so much that we had a whole hour just wandering through its streets and looked in awe at everything: churches, houses, shops, and restaurants. All the buildings are in the Baroque style, each one is a masterpiece of architecture. They were built mostly of light-coloured stones. There were huge crowds of people, mostly tourists everywhere. Many shop windows were decorated a la Mozart. Sweet-shops selling the famous “Mozart” chocolate, candy and pastry looked especially cool with all the merchandise packed in red and golden colours. We bought a small box of chocolates just to try them. They were really delicious, so we bought more. 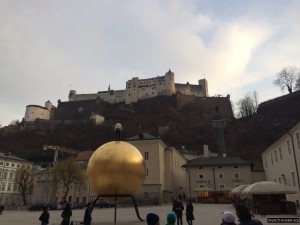 We got to the heart of the Old Town – Rezidentsplatz and Domplatz. These are two beautiful squares with the Cathedral (Dom) between them. The Cathedral is exquisite; its facade resembles Parisian cathedrals, but it is capped with typical Austrian domes. An interesting sculpture or installation to the right of the Cathedral attracted our attention. It is a large golden ball and a figure of a man standing on it. We were told that it was a monument to the confectioner who had invented the famous candy, “Mozart chocolate balls.” In fact, we enjoyed such “balls” just a few minutes ago.

We felt that it was time for lunch. After a brief search, we stopped at the “Zur Goldenen Kugel” (At Golden Ball) restaurant. Judging by its name it was an Austrian-cuisine restaurant, and we wanted to try the local cuisine. In general, we were not mistaken, although we found the Austrian cuisine akin to German. They serve the same schnitzels and sausages with potatoes and salad. The food was tasty, although maybe not for snobby foodies. They also had Munich beer, Augustiner. We did not spend much time in the restaurant because we had planned to visit one of the main Salzburg’s sights, the famous Hohensalzburg Fortress.

The Hohensalzburg Fortress used to be the residence of Prince-Archbishops, the rulers of the Principality of Salzburg. It sits atop of a mountain and is towering over the city. Thankfully there is an inclined cable railway (funicular) leading there. The funicular bottom station is located right in the downtown not far from the Cathedral. The ticket costs €11.30 and includes admission to the fortress. A breathtaking panoramic view of the city opened during the ascent. The summit is more than 100 meters above the river valley and is topped by the high walls of the fortress. One can see everything from above. We really admired the height and views of the city below. Even inside the fortress the paths are very steep. Evidently, it would have been very difficult for the enemy to capture this fortress. The Hohensalzburg Fortress is very large in size; it used to be one of the largest medieval fortresses in Europe. Despite its age, there are no ruins, the walls as well as all the buildings and interior chambers are perfectly preserved to this day.

Medieval cannons are at the embrasures as if nobody had ever moved them from the time immemorial. The living of the time is well represented inside the fortress: there is a water well, a small tavern, a kitchen with utensils and so on. We encountered two museums: the Museum of Torture and the Puppets Museum. We chose to visit the latter because it was smaller, and we were already rather tired. We were very impressed by the big and complex mechanical dolls; we had never seen anything like that before. They are not just static exhibits, but move and play some short shows. There was an inscription on one door “Please open.” Well, we did open it – a skeleton popped out and whinnied wildly. Such a good black humor.

There is a café in the fortress, so we did not miss the opportunity to have a round of beer before leaving. 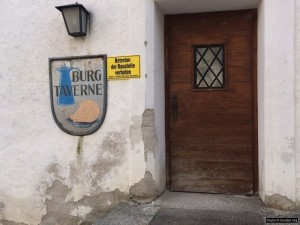 It was half past three when we were ready to leave the Hohensalzburg Fortress. We also planned to go to the Haus der Natur (House of Nature) museum and particularly wanted to see the underwater world. However, we felt that it was not enough time for that, unless we stayed in Salzburg very late or even overnight. It was not in our plans, so we decided to go to the train station to catch a train back to Munich. We were later told that one would need almost the whole day for the Haus der Natur visit. This Museum of Nature is very large; it shows different aspects of natural world and houses a Science Center, aquarium and reptile zoo. We’ll have to come to Salzburg some other time to see this museum.

It took us about half an hour to walk back to the train station. Of course, we were tired, but we got wonderful impressions of the city and that compensated our fatigue.