Dachau Concentration Camp – a museum one has to visit 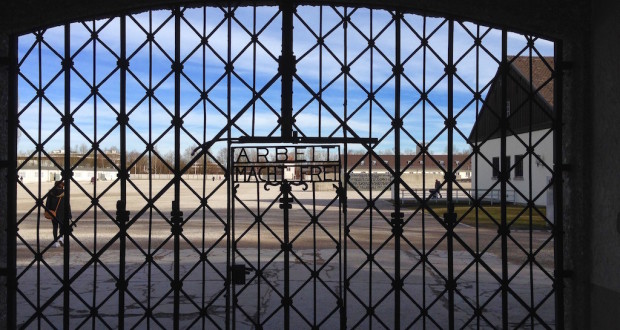 Munich-Dachau round trip (by car): 40 km, 1 hour
To get there by public transportation (1 hour 15 minutes round trip): From the Main Train Station (Hauptbahnhof) take S-Bahn, line S2 in the direction of «Dachau/Petershausen», get off at the «Dachau station». Take bus number 726 in the direction «Saubachsiedlung», get off at the «KZ-Gedenkstätte» stop.
Total duration: 3 hours

There are places on Earth that you have to visit. Even if you do not really want to. Well, such trips are not for entertainment anyway. We came to the former Dachau concentration camp one day in May, in the afternoon. It is a relatively short drive from Munich, so after half an hour we reached the town with this name, Dachau. By the way, if you do not have a car, it is rather easy to get there by public transportation – take S-Bahn line S2 to Dachau and then a local bus.

Dachau is a rather typical German town – the same houses with tiled roofs as everywhere, people leisurely going about their business. In short, there is nothing remarkable. “I would have never been able to live in such a horrible place,” I thought. Of course, my thoughts were about the terrible history associated with the town’s name. Can one ever forget and forgive?

The parking lot at the camp was almost empty and, while we were driving into it, rain started to drizzle. I felt some strange uneasy sensation. “Well, everything fits together,” I thought while we were walking to the camp gate. By the way, the gate bears the same words as in Auschwitz: «Arbeit macht frei» (literal translation is “work makes free”). It seems to be the Nazis’ trademark slogan. Unfortunately, the gate with the slogan was stolen by someone in November 2014; “a shameful act” according to the local residents.

Before coming to Dachau, I had already heard the story of this camp. It is somewhat different from numerous other Nazi concentration camps. Yes, there were horrible conditions, abuse of prisoners, cruelty, atrocities, inhuman medical experiments, summary executions, gas chamber, crematoria, etc. The difference of this camp’s story is that some of surrendered German guards were shot on the spot without a trial by American soldiers. The Americans were really shocked and appalled by what they saw in the camp when they liberated it near the end of the war. Afterwards, the troops were not court marshaled or tried in any other way. I must say after visiting the camp that I would not have been a judge for them either.

Today, only one prisoners’ barrack is preserved in the camp as a museum. In place of the rest is just emptiness. It is an ugly wooden barrack. Inside the barrack, there are “bedrooms” – partitions with three-level bunked beds. One section is empty, it was the “dining room”. On the walls, the posters demanding that the prisoners keep order and tidiness, are still preserved from that time. Well, even now everything there is clean and tidy… On the so-called bed, one could fit only curled up. No mattresses, no blankets, no pillows, absolutely nothing even remotely resembling bed linen. Well, that’s all. That was prisoners’ existence. Every day prisoners were sent for hard labor in the nearby factories. Sometimes they were allowed to walk in the camp, at the gunpoint of the guards on the towers. One such tower and a fragment of the barbed wire fence are still there today. It is right at the location where the prisoners were sent to the gas chamber. This is the most horrifying place in the camp. It is a simple brick structure with two compartments. In one of the compartments, prisoners undressed, and then they went naked to the other compartment, thinking that they were going to the shower… It was there that they were choked by gas through the vents. Those who did all this were also sort of humans; or can we call them humans? That’s the story.

Several religious memorials were erected in the camp in memory of those killed and tortured there. We saw at least two – a Christian chapel and Jewish memorial. As in almost every museum, there is a gift shop at the exit. We did not buy anything there. I did not want to have anything from this place; I will remember it until the end of my days without any “souvenirs”. By the way, I understood in the end why the car parking was almost empty. Actually, there were quite a few visitors in the camp; however, few people would want to stay there longer than necessary. Most want to leave as soon as possible and try to forget what they saw. Life goes on. 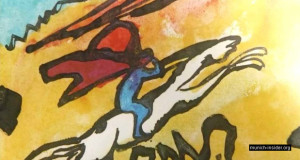 Wassily Kandinsky – Following the Footsteps of the “Blue Rider” 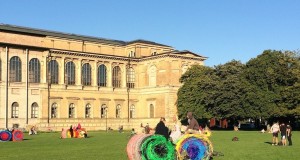