German Museum of Science and Technology in Munich 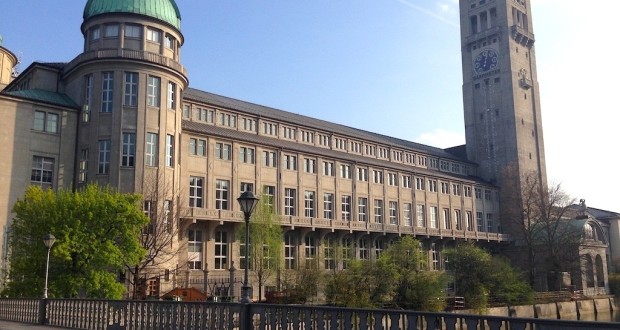 In every large city there are museums that stand out against the others. The German Museum (Deutsches Museum) in Munich is such an outstanding museum. We were strongly advised to find some time in our busy schedule to visit it. We listened to the advice, and I can tell you that we did not regret it.

The museum is located on an island in the Isar river near the Isartor gate. We came there by S-Bahn. By the way, a few words about S-Bahn. These urban trains go from Munich to outlying areas, up to a distance of 20-30 km from the city. Intervals between trains on each of the 7 lines are about 20 minutes. In the city, all S-Bahn lines merge, which results in only about 3 minutes wait time for the next train. Many S-Bahn stations are joined with U-Bahn stations, therefore, S-Bahn is as convenient as U-Bahn for travel within the city.

From Isartor we walked down a wide avenue towards Ludwigsbrücke (Ludwig’s bridge). The area near Isar is an old city district, but we found it very modern and lively. Shops, restaurants, hotels and a beautiful wide bridge over the river – you can really feel that you are in a major European city. From the bridge we went straight to the German Museum, located right there on the island. We had planned to spend about 3 hours in the museum, but actually stayed 4 hours there, and I must say that it was still not enough time to see everything we wanted. The museum is huge, all the halls are interesting and one can spend many days there.

By the way, this is the largest technical museum in the world. Ships, submarines, airplanes, cars, and even a lunar rover – all are genuine, some exhibits were once driven, others were sailing or flying. Some exhibits are sectioned whole, so that the visitors could see what’s inside. You can not only take a look at all details, but also touch everything. For example, there is a longitudinally sectioned submarine there. You can figure out right away where the engine room is, or the dining and sleeping compartments for sailors, and so on. We noticed that the beds were very small and the ceilings were so low that it is obvious that submariners should not be very tall. It was interesting to have a look at the Messerschmidt and Junkers airplanes, which are often shown in the movies about World War Two. There is a space pavilion in the museum, where we examined for a long time a small exhibit showing the principle of jet propulsion. By the way, the local German families come to the museum with their children who are the most curious visitors, especially boys.

On the museum grounds, there are exhibits of mines, showing extraction of coal and other minerals, and even a small plant producing bricks. In one of the halls, we encountered a nuclear reactor! Since we were almost out of time, we had to almost run through the halls exhibiting different factory machines, such as, printing presses, looms and so on. We also had a brief break for a snack in a cafeteria on the 3rd floor, which was not bad at all. Overall, the museum has impressed us a great deal.