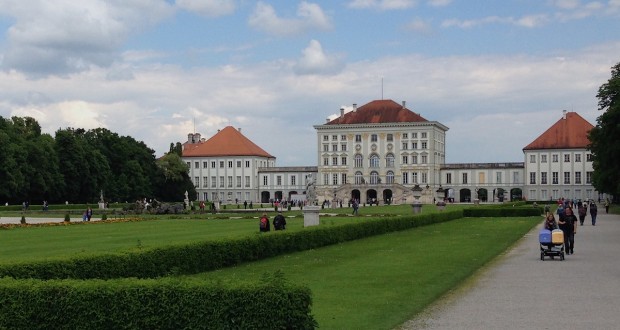 European monarchs always lived in a big way; in addition to the main residence in the capital they had one or more summer residences. As a rule, they were built in the capital’s upscale suburbs, for example, Bourbons owned Versailles near Paris, Romanovs had Peterhof near St.Petersburg and Habsburgs had Schonbrunn at the Vienna’s outskirts. Possessions of Bavarian kings and Wittelsbach kurfürsten were more modest – no empire, just a relatively small kingdom. Therefore, their winter residence in the center of Munich (Residenz München) as well as the summer home, Nymphenburg Palace, were built without much extravagance and excessive lavishness. Nevertheless, there is a lot to see there, because the paraphernalia and unique collections exhibited in the palaces reflect the rich history of this land. 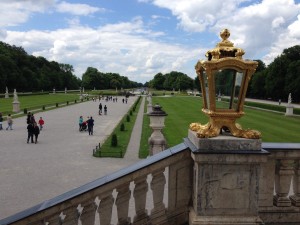 The Nymphenburg Palace is located within the city of Munich, just 8 km (5 mi) from the downtown. However, in the 17th century, when it was built, this area was still an outlying suburb. Well, today the former residence is situated in a beautiful and aristocratic area of the city called Maxvorstadt. One can get directly to the palace gate by Strassenbahn (streetcar, tram) number 17, but we decided to go by U-Bahn (subway). The Nymphenburg Palace is approximately a kilometer from the Gern station. It is a pleasant walk, 10-15 minutes, along a pretty canal with swans and ducks. In front of the palace, there is a small park laid out in the French style with neat flower beds. Well, it is not Versailles, but the place is still cozy. The palace consists of several buildings built in the same style. At first glance, it appears underwhelming, too simple for royals. In reality it is not so. Nymphenburg was built with German stringency and efficiency, and this also has its own beauty. Its architecture also bears specific Bavarian flavor.

Tour of the Palace Halls and Museums

First, a few words about the entrance tickets. Those wishing to see the entire Nymphenburg complex, including the main and smaller palaces, need to buy a general ticket, Gesamntkarte Nymphenburg. This tour is about three hours long. For those who may find this boring, there is a choice of a tour of the main palace only or the main palace in conjunction with Marstallmuseum. We chose the latter variant because we wanted to save some time and energy for the beautiful palace garden in the courtyard.

Many halls of the main palace impressed us by their lavishness, which was surprising, given the modest facades of Nymphenburg. Indeed, the Germans do not like putting their true wealth on display. Among the paintings exhibited in the palace we found the Gallery of female beauties the most interesting. It included several dozen portraits of the ladies of the time, of different ages and social classes.

Marstallmuseum houses two great collections: horse-driven coaches and carriages, and a porcelain museum. We were struck by the collection of carriages from different epochs, particularly by the royal ones exhibiting enormous amounts of inlaid gold. The Porcelain Museum is for those who are fond of such things; lots of women were vising it. 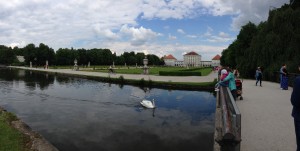 The palace and museum tour was not tiring. After the tour it was nice to relax and take a stroll in the beautiful palace park. It is a real paradise with fountains, ponds, canals, waterfalls, swans and so on. There are many beautiful corners to capture memorable photos. There is a beer garden there, which is especially convenient on a hot summer day. Overall, it was an easy and pleasant half-day trip. Share on: