Oktoberfest in Munich – the Biggest Beer Festival in the World 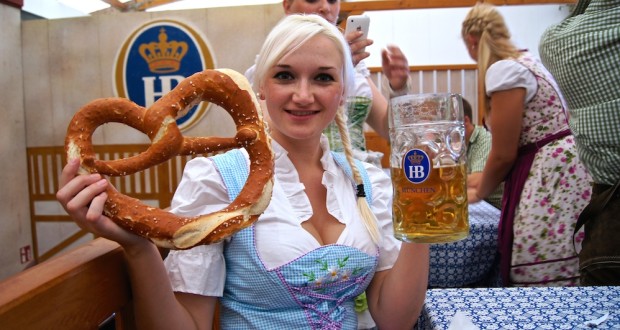 Only in the beer tents you can see Oktoberfest as well as participate in it.

Tips from the Insider:

The main question is how a foreign tourist can get into a beer tent without an advance reservation? Here are some tips from our own experience:

Getting there: The festival is held annually at Theresienwiese. U-Bahn (subway) lines U4 or U5 (station «Theresienwiese»).

So much has been written about the famous Munich’s Oktoberfest that it may seem difficult to add anything new. Nevertheless, I will try to add my two cents on this subject based on my personal experience accumulated over the years of participating in this celebration of “Beer and Life”. Year after year, I am not getting bored or tired of this Bavarian fun. On the contrary, something always attracts me to this ever friendly and cheerful motley crowd representing different nations and classes. Why is that? I think the answer is simple. There is absolutely no grand idea or meaning in this festival; just drink beer, enjoy life and be happy along with others. All are equal, everybody smiles, sings very loudly, sometimes shouts and nickers without any apparent reason. Everybody is happy simply because they feel good now and that’s it. The saying that “there are people who feel badly because others feel good” does not apply here. Everybody feels good here and it is the whole point of this festival; its entire philosophy if you wish. Anyway, I understand it that way.

How it began and what it is now 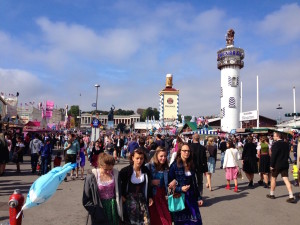 Let us get to the point and describe the festival. It is not just binge drinking and chaotic fun, Oktoberfest has its own traditions and rules. First, a bit of history. Oktoberfest has been celebrated for more than 200 years, with a few interruptions due to wars and revolutions. It all started with the wedding of crown prince Ludwig (later King Ludwig I of Bavaria) to Princess Therese of Saxe-Hildburghausen. For that occasion, free beer and food were given to the people. Probably, the Bavarians liked it so much that they began to gather in the same place at the wedding anniversary times. Even if it was not quite so, this version is as good as any other. Nobody knows all the nuances of history anyway.

Despite its name, nowadays Oktoberfest takes place mostly in September and only ends at the beginning of October. The festival lasts for 2 weeks and 2 days, and always at the same location which is called Theresienwiese (translated as Therese’s meadow). Actually at present, it is not a meadow, but a huge square close to the Munich downtown and not far from the main train station. It is better to use the subway (U-bahn) to get there, the nearest station is called Teresienwiese. During the festival the Teresienwiese station is overcrowded, but you can easily walk from other nearby stations; for example, it is about 10 minutes’ walk from Hauptbahnhof (Main Train Station). Do not even try to drive there, the probability of finding a parking spot is zero. 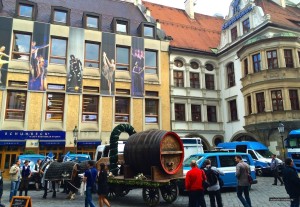 Only on the first weekend some festivities take place outside the Theresienwiese square. On Saturday, the festival opens with a traditional colorful procession of the beer tents’ hosts. They parade from the city center to Theresienwiese. Then on Sunday, a very bright and merry mini-carnival marches along Maximilianstrasse. All these are interesting and certainly worth watching if you have time. However, this is not the festival proper, or rather not the most important part of it. They say that if you did not get into one of the beer tents, then you have not been to the Oktoberfest. It is only there that you can see and feel the very essence and spirit of Bavarian fun and joy, and at the same time participate in it. Well, what is so unusual happening there? I’ll try to briefly describe what is happening on the basis of my personal experience.

Usually, there are about 30 beer tents of different sizes on Teresienwiese. The big tents are those that the British would probably call marquee, they can seat several thousand people each! Each of the tents belongs to one of the six major Munich breweries: Augustiner, Hacker-Pschorr, Hofbräu, Löwenbräu, Paulaner and Spaten-Franziskaner. Only these breweries supply beer to Oktoberfest. One needs to see with their own eyes how the tents are decorated inside and outside, it is a special art form and each owner excels in their own way. For example, the Löwenbräu beer tent is decorated in a Bavarian country style, and even the corporate lion on the tower drinks beer. In the Hacker-Pschorr tent, you drink beer as if under a blue sky with white clouds; the company reminds us of its logo “Heaven of Bavaria.” 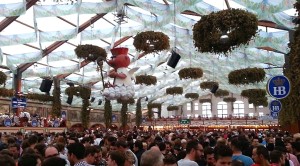 The most popular among foreigners is the Hofbräu tent – it’s a gorgeous tent with a crown at the top. Inside, the ceiling is decorated with an elaborately made huge hops vine. I am not going to bore you with a description of all the tents; of course, it is better to admire them in person, so try to get inside. Everywhere the eye can see, there is a huge number of tables with chairs or benches. A big stage for musicians is in the middle. The seats with chairs are considered more prestigious and are booked in advance, sometimes as much as six months before the festival. However, on the benches you can get almost at any time.

When I got into a beer tent for the first time, it was the Augustiner Festhalle tent, at first I felt like a stranger at this celebration of life. Almost the entire crowd was in traditional folk costumes. Men wore trachtens, that is, leather pants and plaid shirts, many had Tyrolean hats. Women, who were present in a surprisingly large number, wore dirndls, that is, lush dresses with frills. Everything looked very colorful. It was evening already and the patrons were pretty drunk and sang, rather screamed, their Bavarian songs embracing and swaying from side to side. Many were doing this while standing on the benches. We squeezed into our seats with some difficulty and did not feel quite comfortable until the first round of beer. However, after a liter of beer we felt somewhat relaxed, and little by little the environment became more and more interesting. To hear each other, we had to talk very loudly, sometimes almost yell. So, gradually our voices joined in the general clamor of the buzzing room. Pretty soon, we also began to sway to the music and jump on the bench. We spent about three hours in the tent and drank three liters of beer each. By the way, Oktoberfest beer is served in a “Mass” which is a one-liter (about 2 pints) mug. Therefore, the first piece of advice: plan your time in a tent on the basis of liters of beer you are going to drink, that is, 2 hours – 2 litres, 3 hours – 3 liters and so on.

We usually order a pork leg which goes very well with beer. So, here is the second piece of advice: fat Bavarian food is a good remedy against excessive drunkenness. You can try a pork leg or grilled chicken or famous Bavarian grilled sausages. Generally, the service in the tents is very good, the waiters work like ants. Despite the huge crowd of people, the service is quick; the waiters, including girls, carry up to a dozen one-liter mugs at a time. They say that a waiter can earn up to 15 thousand Euros (thanks to tips) in the two Oktoberfest weeks. Mostly, they are university students and Oktoberfest income is enough for some for the whole year of studies.

At first I wondered why so many women come to Oktoberfest. I do not think it is for a liter of beer, to which most of them are rather indifferent. Likely, what attracts them is all the splendor of the fest, beer tents’ interiors, music, and most of all the stunning fashion show of traditional folk garments. 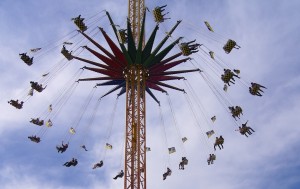 Generally during the daytime, local Germans come to Oktoberfest with their entire families. Around the tents, there are numerous amusement rides and other attractions, particularly for children and teenagers. These are not just traditional merry-go-rounds and a Ferris wheel, but mostly new advanced rides and roller coasters: crazy towers with simulated free fall and other screamers designed to inject a little adrenaline into your blood. For adults, I would recommend trying those rides before drinking beer, otherwise one can get almost sea-sick.

Oktoberfest in numbers as well as some problems 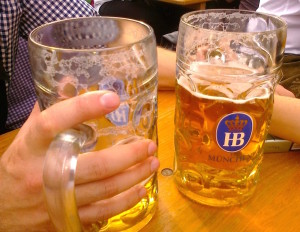 Here is some Oktoberfest statistics. Every year, about 6 million people come to the fest and drink about 6 million liters of beer. The festival brings more than 500 million euros to the city annualy. The price of beer increases every year; for example, it was mostly just under €10 in 2014 while the prices in 2017 were from €10.60 to €10.95.

Even though it is considered a local Bavarian festival, it attracts more and more international visitors. At this time of year, hotels in the city are usually all booked a few months in advance. We can give a couple of pieces of advice to those who did not make a reservation in time. Rooms can be found in out-of-town hotels, just make sure that the hotel is located close to an S-Bahn (commuter train) station. In the city one can rent a private apartment, so-called Ferienwohnung. Many Munich residents have their vacations and leave the city at the time of Oktoberfest; some of them sublet their apartments to tourists as Ferienwohnung. You can still try hotels in the city, sometimes there are a few rooms available due to cancelled reservations, though usually at an exorbitant price.

By the way, a certain part of population opposes this Bavarian folk festival, though not very vigorously. They usually grumble about the environment, health dangers and criminal activities. Indeed, during Oktoberfest, the Teresienwiese area and surrounding blocks are transformed into a large public toilet, even though there are enough bathrooms in the tents as well as outside on the square. I am not sure if it is really so harmful to the environment, but I do feel pity for the residents who live nearby. There are a lot of drunks at the festival, some of them are not even able to move without assistance. Even deaths caused by overdrinking happen, though very rarely. There have been also complaints about sexual harassment, as is the case for many other events with a lot of booze. About ten years ago, a protest “For a safe festival for girls and women” was organized. Still, criminal cases are rare at Oktoberfest and the atmosphere is generally relaxed and friendly.