English Garden – an island of nature in the center of Munich 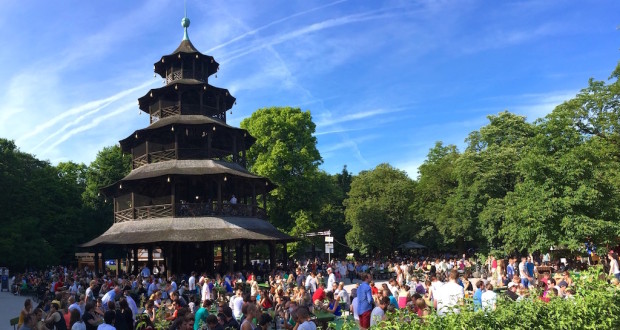 Germany is one of the greenest countries on the European continent thanks to its mild climate with moderate rainfall. Even in urban areas, Germans try to preserve natural landscapes, and parks are a good example of this approach. In any German city, large or small, there are lovely parks with green lawns and mirror ponds. The most famous of the German parks is Munich’s Englischer Garten (English Garden), it is well-known far beyond Munich and Germany. The word English in the park’s name refers to the style of park design and layout. In most European parks, the French style dominates; this style is characterized by a geometrically regular layout with neat flower beds and alleys. On the other hand, the English park style makes the most of natural landscapes. Englischer Garten in Munich is of the latter type, which reflects in its name.

Walk in the Garden 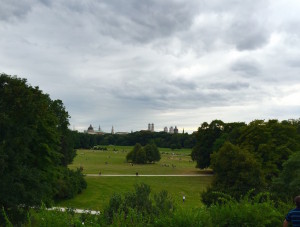 Living in Munich, we often come to the park, just for a stroll to relax in nature close to the city center. Sometimes we also stop for beer in one of the Biergartens (beer gardens) under the canopy of chestnut trees. I will try to describe a generalized walk through the park drawn from many visits. We begin our walk from the Haus der Kunst (House of the Arts). The nearest U-Bahn stations are Lehel or Odeonsplatz, depending on where you are coming from. When facing the somewhat gloomy building of the Haus der Kunst, the entrance to the park is to the right, though it is not marked in any way. There is always a small crowd of people here watching a very interesting attraction. The Eisbach stream rapids form a so-called standing wave at this location, which is suitable for surfing. Surfers from around the world like this place, and every day from dawn to dusk they show their skills and give free performances to numerous spectators. We have seen this spectacle many times, and yet again and again admire this unusual show. Having enjoyed this entertainment for a little, let us go further into the park. It is better to walk along a small river, rather a creek or stream, which is called Schwabinger Bach. It flows through the entire park to its northern part. There are lovely green meadows on the river banks, where Munich residents like to have picnics and grills (barbeque). Many simply relax and sunbathe if the weather complies. One can do it in a nudist area, for example, on the Schönfeldwiese meadow on the west bank of the stream. Anyone interested can stay here; as for the rest of you, let’s continue on to more park’s attractions.

We are now coming to a small green hill to the right from the stream. On the hilltop there is a round colonnade structure which looks like a miniature antique temple or simply an exquisite gazebo. Its architecture is clearly of the Greek style. This is the Monopteros rotunda, built almost two hundred years ago. In addition to the columns it has a distinctive dome decorated inside with colorful frescos. It is worth going inside to admire these murals. This pretty structure looks very inviting on the background of green meadows and hills, so it seems suitable to shoot a couple of photos here. 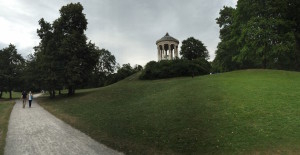 Another five minutes’ walk deeper into the park from the Monopteros, and a pastoral idyll of peace and birdsongs is replaced by Bavarian folk music and the roar of thousands of voices. We are approaching the main attraction of Englischer Garten, namely, Chinese Pagoda and a huge biergarten around it. The wooden structure, which is only stylized as a pagoda, is more than two hundred years old. It burnt during World War II and was later rebuilt. The oriental architecture of this building is most impressive when illuminated in the evening and especially with Christmas lights. It is not a Chinese restaurant around the pagoda though, but one of the largest Bavarian biergartens. It seats 7,000 people at a time. The beer served here is the famous Hofbräu. Along with beer they serve typical German food: bratwurst (grilled sausages), pork, potatoes, pretzels, and so on. It is a self-service establishment and the prices are affordable. Most of the customers are tourists rather than locals, but the atmosphere is very cozy and we usually settle here for a couple of hours.

If someone wants to experience true Bavarian flavor, one can walk across the pedestrian bridge into the northern part of the park, which is called Hirshau. The biergarten here is about three times smaller than at the Pagoda, but almost all the customers are locals as well as university students (the campus is nearby). The beer served here, Spaten, is just as good. There is nothing special to see in Hirshau, but you will be farther away from the bustle of the city and can immerse yourself in nature more completely thanks to the forest-like surroundings.

Englischer Garten is very large in area; it is larger than the famous counterparts in New York and London. Therefore, it is better to allocate almost the entire day (at least until dusk) for a visit. After all, where else one can see such a wonderful nature without going far away from the center of a large metropolis.